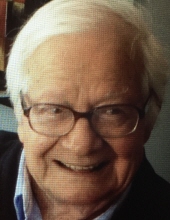 Anthony Paul (Tony) Paolo, 95, of Weirton died at Weirton Medical Center on Saturday, May 5, 2019. Born on February 11, 1924, in Weirton, Tony was the son of the late Angelo and Angela Paolo. In 1947, Tony married the love of his life, Lena Marie Brancazio, with whom he celebrated 70 years of marriage. A graduate of Follansbee High School, Tony served in the Navy during World War II where he received a Purple Heart for his heroism aboard the USS Bagley. He worked on the Pennsylvania Railroad, later Conrail, for 43 years. Tony Paolo was a kind, gentle, congenial and handsome man with a good sense of humor. He was committed to his family and never spoke ill of anyone he encountered. He displayed unwavering courage after the loss of his wife and his life partner, Lena, and in the face of the numerous health challenges that followed. He enjoyed horseracing, crossword puzzles, sports, music and telling jokes. He was predeceased by his wife, Lena Paolo, and his brothers, Benny, Dominic and Joseph Paolo. He is survived by his children; Bernadette Paolo, Thomas Paolo and his daughter-in-law Darlene Paolo of Bethel Park, PA; his grandchildren, Carla (Christopher) Sweeney of Charlotte, NC, Dena (David) Robinson of Sterling, VA, and Tony Paolo (Samantha Strahota) of Pittsburgh, PA; his great-grandchildren Cole, Natalie, and Jack Sweeney, Alexander and Charles Robinson; his sisters-in-law, Helen Paolo and Helen Brancazio, and many nieces, nephews, cousins and close friends. Visitation will take place at the Greco-Hertnick Funeral Home on Thursday, May 9, from 4:00 -8:00 pm. A Mass of Christian Burial will be celebrated at Saint Joseph the Worker Church at 1:00 pm on Friday, May 10. Interment will follow in St. Paul Cemetery, Weirton. The family wishes to acknowledge and thank Tony’s caretakers; Rita Kaylor, Sue Adams, the management and staff at Serra Manor and all those who have extended such kindness during his convalescence. “The thing about a hero is even when it doesn’t look like there’s a light at the end of the tunnel, he’s going to keep digging, he’s going to keep trying to do right and make up for what’s gone before, just because that’s who he is.” Joss Wheeler Tony Paolo was a quiet hero. Share tributes and memories at www.grecohertnick.com
View current weather.