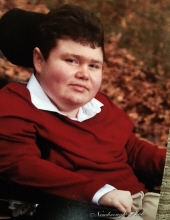 Cody Lee Wayne Taylor, of New Cumberland, WV, a kind-hearted, intelligent son, grandson, brother, and uncle passed away Wednesday from complications associated with Duchenne muscular dystrophy. He was 22. Cody was born in Weirton, WV on August 21, 1998, to Jerome and Lorie Tingler Taylor. Cody was a 2017 graduate of Oak Glen High School, where he was a member of the National Honor Society. He continued his education as an accounting major at the West Virginia Northern Community College. In college, he maintained a 4.0 plus GPA and was on the President’s List. While in college he was a member of the Phi Theta Kappa Fraternity and participated in student government on the Activity Board of the Weirton Campus. Cody was also the recipient of the Business and Student Leadership Award. A history and science buff. Cody enjoyed traveling across the country. The Grand Canyon, Hoover Dam, the museums of Washington DC, Florida, and New York City were among his favorite places to visit. Closer to home, he enjoyed playing video games, watching Star Wars, building Lego ships, collecting Pokémon cards, and attending Pittsburgh Pirate games. Most of all Cody will be remembered for his courageous attitude. He never complained about his condition or the surgeries that he had to endure in his lifetime. He never had a bad word to say about anyone. His funny and sometimes sarcastic wit will bring smiles for years to come. He was loved by all who knew him. Cody was preceded in death by his grandparents, Wayne and Mary Ann Timko Taylor, and Richard Tingler. He will be remembered with love and admiration by his mother, Lorie Tingler Taylor (Mike Peterson); his father, Jerome Taylor (Genie Taylor); his brothers, Derrick Polen (Mahryeian Polen); Brandon Reese (Julia Zawoysky); sister, Ameerah Taylor; Grandmother, Barbara Crago Tingler; nieces and nephews, Hayden, Bailee, Drake, and Chase. Visitation will be Sunday 1-6 PM at the Greco Hertnick Funeral Home, where services will be held on Monday at 11: 00 AM. Bishop Craig Greathouse will preside. Interment will follow at New Cumberland Cemetery. Memorial contributions may be made to the muscular dystrophy association. www.mda.org Share tributes at www.grecohertnick.com 304 748 3219
View current weather.