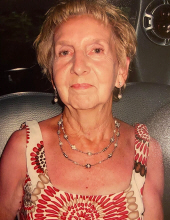 Elizabeth “Libby” Ann Messerly of Weirton, WV passed away at her home on Monday, March 7, 2022 with her four children at her side. She was 86. Libby was born in Rowlesburg, WV on July 9, 1935. She was the daughter of Pierpont “Dutch” and Adalaide Miller Harman and biological father C. Ray Calvert. Her family moved to Morgantown, WV, where Libby graduated from Morgantown High School in 1953. On May 1, 1956, she married Charles “Chuck” W. Messerly Sr. She met Chuck on a blind date and after three dates, she secretly hopped a train from Wheeling, WV to New Mexico and married him in Phoenix, AZ. Chuck and Libby lived on the Army base until moving back to Martins Ferry, Ohio. They started their family and moved to their home on Marland Heights in 1966. Chuck and Libby were blessed with four children, eventually nine grandchildren and ten great-grandchildren. Sadly, Chuck passed away on June 16, 2004. In the mid-seventies, Libby took a job at Marland Heights Pharmacy where she enjoyed working for twenty-plus years as a pharmacy technician. Libby was caring, thoughtful and giving. Every year you could count on a birthday card from Libby. She enjoyed playing cards with her friends, babysitting, and volunteering her time at the Weirton Senior Center but nothing compared to her joy of spending time with her children, grandchildren and great- grandchildren. She was an avid West Virginia University Mountaineers fan. Libby was a member of the Cove Presbyterian Church in Weirton, Eastern Star, and a lifetime member of the Weirton Termite Association Auxiliary, where she was the past President, Vice President and Treasurer. In addition to her parents and her husband, Libby was preceded in death by her grandson, Derek Messerly; her brother, Tom Harman, and her sister, Catherine “Kitty” McLaughlin. She will be remembered with love by her sons, Charles Messerly, Jr (Cathy) of Tomball, Texas, Daniel Messerly (Marcy) of New Cumberland and Bryan Messerly (April) of Morgantown; her daughter, Deborah Hawthorne (Jeff) of Weirton; brothers, Ed Harman, David and Donald Calvert; sister, Dorotha Stanton; eight grandchildren, Robert Hawthorne, Rhonda Milosicevic, Michael, David, Wyatt, D.J., Judd and Carper Messerly; and her ten great-grandchildren, Alayna, Maci, Brooklyn, Easton, Nick, Alexa, Alex, Riot, Kaylee and Andrea, and several nieces and nephews. Visitation will be 4 PM until 8 PM Thursday at the Greco Hertnick Funeral Home, 3219 Main Street Weirton, WV. Additional visitation will be Friday from 1 PM until the 2 PM funeral service at the funeral home. Entombment will follow at Highland Hills Memorial Gardens, Follansbee. Memorial contributions may be made to the NORMA MAE HUGGINS CANCER ENDOWMENT FUND at the WVU Cancer Institute 1 Medical Center Drive Morgantown, WV 26506 Share tributes at www.grecohertnick.com
View current weather.