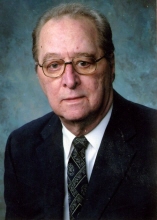 George Gvoyich, 73, of Weirton, passed away Wednesday, December 30, 2009 in the Weirton Medical Center. Born May 8, 1936 in Weirton, he was the son of the late Paul and Susan Lisko Gvoyich. He was also preceded in death by his daughter Kris Ann Gvoyich Stevens and sister Anna Gvoyich. With over 30 years of service, Mr. Gvoyich retired from Weirton Steel where he worked in the Finish Products Warehouse. He was a member of the St. Joseph the Worker Roman Catholic Church, VFW 2716, American Legion Post 10, WSX 25-Year Club and Tri State Marine Corps. Very active in the Weirton community, George served 4 terms in the WV House of Delegates and 2 terms on the Hancock County Commission. In 1988, he was honored by the WV State Democratic Executive Committee as "Outstanding Democrat of the Year". For 21 years, he served on the Board of Directors for the Hancock County Sheltered Workshop and was a member of the American Federation of State, County and Municipal Employees (AFSCME). Those who knew George are aware there are many other services and accomplishments that are too numerous to mention. He served in the US Marine Corps, having served 2 years overseas in the Philippine Islands and Japan. He served in the Infantry and as an Administrative, Legal Clergy and Military Police. George is survived by his wife Viola Riggi Gvoyich and daughter Deborah L. George both of Weirton. He also leaves his adoring pets: Mia, Bobbi, Nikki, Lillie and Allie. Friends will be received Saturday, January 2, 2010 from 10AM until the 11AM funeral services at the Greco-Hertnick Funeral Home, 3219 Main Street, Weirton. The Reverend Father Dean Borgmeyer will officiate. Interment will be in the Serbian Cemetery, Weirton. Memorial contributions may be made to Hancock County Animal Shelter, Post Office Box 508, New Manchester, WV 26056.
View current weather.