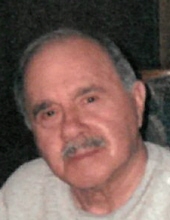 Gerard “Jerry” Figlioli, 91, of Weirton passed away unexpectedly on January 11, 2022. Gerard was born on October 30, 1930; one of seven children born to Carlo and Clementina Sabatini Figlioli. At the age of 17 Jerry joined the US Army and served during the Korean War. After returning from the war, Gerry worked at Standard Slag as a loader and driver; a career that spanned over three decades. He retired in 1993. Jerry was a member of Saint Paul’s Roman Catholic Church and the American Legion. In addition to his parents, he was preceded in death by his ex-wife, Dorothy, his daughter, Debbie McLaughlin; his three brothers, Albert, Tony, and Frank; and his three sisters, Mary Fazi, Lucy Paganelli, and Rose Jelski. He will be remembered with love by his son, Jerry Figlioli; and his four grandchildren, nine great-grandchildren; several nieces and nephews. Private viewing was held on Sunday for Jerry's son. There will not be any public services. Share tributes at www.grecohertnick.com
View current weather.