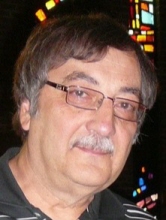 John D. Brun, 72, of New Cumberland died suddenly on Wednesday, September 14, 2016 at Weirton Medical Center. He was born January 15, 1944 in Steubenville. He was a son of the late August Brun and Julia (Busana) Brun. He was also preceded in death by his sister-in-laws Joanne Merenda and Rosemarie Colantonio, and brother-in-law Joe Frisco. John graduated from Steubenville High School. He retired from Weirton Steel as a member of the Heating and Refrigeration Department after more than 35 years of service. John was also a member of St. Paul Catholic Church in Weirton. In his spare time he enjoyed attending Big Red football games and restoring antique cars with his sons, his favorite being the 1961 Corvette he owned for more than 50 years. John's greatest accomplishment was the care and love he bestowed on his wife, children, and grandchildren. He was a devoted, faithful family man, always willing to take care of any family member or friend that needed his help. He will be remembered for his many talents, including that of his homemade pasta, raviolis, and pizzelles. John is survived by his wife of 46 years Regina (Merenda) Brun. His sons John D. II (Alissa) and Miguel of Weirton; Joshua (Gina) of Charlotte, NC; his daughter Angelica Kokiko (Chuck) of Adena; and his six beloved grandchildren Gianna and Alessia Brun, Gia and Santino Brun, and Noah and Dominic Kokiko. He also leaves his sister Virgina Myers of Steubenville, and brother Frank Brun of Wellsburg, as well as his wife's siblings and their spouses Dolores Frisco, Frank Merenda, Carl (Donna) Merenda, Francine (George) Risk, Eleanora (Steve) Kopa, and Mario Colantonio, and numerous nieces and nephews. Friends will be received on Sunday from 4-8PM at the Greco-Hertnick Funeral Home, 3219 Main St., Weirton. A Mass of Christian Burial will be celebrated at 10:00AM Monday, at St. Paul Roman Catholic Church, Weirton. Rev. Fr. Larry Dorsch will preside. Interment will follow at St. Paul Cemetery, Weirton. In lieu of flowers memorial contributions can be made to St. Paul Parish in Weirton. Funeral Home: Greco Hertnick Funeral Home 3219 Main Street Weirton, WV US 26062
View current weather.