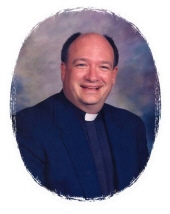 Father Stephen David Dube', 54, Pastor of Saint Joseph the Worker Roman Catholic Church in Weirton, died Thursday, September 14, 2006 at the Weirton Medical Center. He was born on July 11, 1952 in Lewistown, PA to David and Maxine Trafton Dube', now residing in Weirton. In addition to his parents, Father Dube' is survived by his sisters Jeanne Dube' of Ebensburg, PA and Diane and Todd Hancock, and their three children, Amelia, Anthony, and Kalina of Hastings, Nebraska. At the age of nine, Father Dube' knew he wanted to be a priest. As a result of his father’s job transfer, his family moved to Parkersburg, WV, for his senior year of high school, where he graduated from Parkersburg High School. He did his college seminary training at the Pontifical College Josephinum in Columbus, OH and graduated from the Saint Mary’s Seminary and University in Baltimore, MD. He was ordained by the late Bishop Joseph Hodges on May 13, 1978. Father Dube’s first assignment was in Weirton, WV, where he served as Associate Pastor at Saint Paul’s Church from 1978–1980 and Saint Joseph the Worker from 1980–1983. In June of 1983, he was named the pastor of Christ Our Hope Parish in Harrisville, WV. He served as an administrator from 1983-1987 at the Saint Patrick Parish in West Union, WV and pastor of Saint John’s in Saint Mary’s, WV from 1987-1993. In 1993 until 1996, he served as pastor of Saint Catherine and Saint Louis Mission in Ronceverte, WV. In 1996, he was assigned to Saint Joseph the Worker Church in Weirton, where he served as pastor until 2006. Father Dube' was also the Vicar of the Wheeling Deanery from 1997 until 2005 and Chaplain of Weirton Madonna High School since 2003. He enjoyed sports. For the past 16 years, Father Dube' was an umpire and referee for local baseball and basketball leagues. He also served as the public address announcer for Weirton Madonna Basketball and Football. He enjoyed snow skiing, attending professional baseball games and reading to improve his faith and spiritual life. Family and friends will be received 3:00-7:30PM Sunday, September 17, 2006 at Saint Joseph the Worker Roman Catholic Church, 229 California Avenue, Weirton, WV where Vigil Services will be conducted at 7:30PM. Funeral Liturgy with Mass will be celebrated 11AM Monday at St. Joseph the Worker Roman Catholic Church. Interment will be in St. Paul Cemetery. It is requested that charitable contributions, in lieu of flowers, be donated to the Saint Joseph the Worker Roman Catholic Church Memorial Fund, 229 California Avenue, Weirton, WV 26062. Funeral arrangements are under the care and direction of the Greco Hertnick Funeral Home, 3219 Main Street, Weirton, WV. Share tributes with his family at www.grecohertnick.com
View current weather.