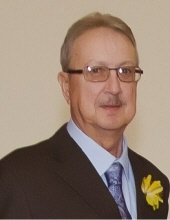 Richard F. Ballard, a selfless loving husband and father passed away unexpectedly at his home on Friday, March 11, 2022. He was 71. Richard was born in Wheeling, WV on August 25, 1950, the youngest of four children born to James F. and Josephine Scotka Ballard. He was in the last graduating class of Follansbee High School Class of 1968. In October of 1970 he met Sharon Richmond and on January 15, 1971 they were married in Dillon South Carolina. In 1975 they were blessed with a son, Richard Jason Ballard. Richard worked as a metallurgist in the B.O.P. Lab of Weirton Steel. He retired from Arcelor Mittal with a combined service of 43 years, working multiple nights of overtime. An avid Pittsburgh sports fan, Richard loved watching the Steelers, Pirates and Penguins. He also cherished the times he was hosting his friends at his home. Many card games of 500 were played and Richard made sure that everyone had a good time. After retiring from the mill, Richard was meticulous around his home and yard and looked forward to taking care of his property on his Kubota tractor. Most of all Richard will be remembered as a loyal, selfless family man who you could always count on. Richard said his four happiest times on this earth were when he married his wife, Jason’s birth, buying his BMW Z3 and when Renee Pearson Ballard became his daughter in law. He was a social member of the American Legion Post 10 and the VFW 2716 He will be remembered with love by his wife of fifty-one years, Sharon Ballard; his son, Richard Jason Ballard and his wife, Renee; his brother, James W. Ballard; his sisters, Lynn Ann Bailey and Jo Marie Hartman, and her husband Thaddeus; his sixteen nieces and nephews; many great nieces and nephews; and his dog Daisy. Private family visitation will be followed by cremation. Memorial contributions may be made to Hancock County Animal Shelter, American Legion Post 10 or to the VFW 2716. Share tributes and memories at www.grecohertnick.com
View current weather.