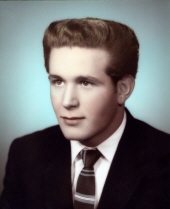 Richard Mauro "Dick" Bucci, 70, of Follansbee passed away Friday August 7, 2009, at his home. He was born on April 12, 1939, in Steubenville, OH, a devoted son of the late Adamo and Constance Bucci. Dick retired as a foreman in the Tin Mill from the Weirton Steel Corporation, after 32 years of service. He was a standout in football at Follansbee High School, and remained an avid sports fan, cheering on Notre Dame, the New York Yankees, and the Pittsburgh Steelers. When Dick was not working he exercised regularly at Hard Bodies Gym in Weirton. Richard was a member of Saint Joseph the Worker Roman Catholic Church, K of C 3734; Fourth Degree Assembly; 25 Year Club of Weirton Steel. He is survived by his loving wife, Joyce Thompson Bucci, whom he married on November 25, 2000; his son, Richard C. Bucci of Pittsburgh, PA; his Aunts, Mamie Bucci, and Nancy Tarr of Steubenville, OH; several nieces and nephews, and his dogs, that he loved, Buttons and Bert. Visitation will be 1-3 and 6-8 PM Sunday at the Greco Hertnick Funeral Home 3219 Main Street Weirton, WV Knights of Columbus Rosary will be recited 6 PM Sunday. Funeral Liturgy with mass will be celebrated 12:30 PM Monday, at the Saint Joseph the Worker Roman Catholic Church, Weirton. The Fourth Degree Assembly will stand in honor. Rev. Fr. Peter A. Giannamore will preside. Entombment will follow at the Saint Paul Cemetery Mausoleum. Richard's family would like to thank Allegheny General Hospital, Trinity East and Weirton Medical Center for all of the care that Richard received. Memorial contributions may be made to the Saint Joseph the Worker Roman Catholic Church 229 California Avenue Weirton, WV 26062 Share tributes and memories at www.grecohertnick.com Funeral Home: Greco Hertnick Funeral Home 3219 Main Street Weirton, WV US 26062
View current weather.