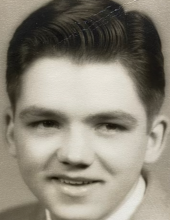 Robert Louis Mark of Weirton, a loving father, grandfather, and great-grandfather passed away peacefully at his residence with his family by his side on Tuesday, February 8, 2022, under the diligent care of his family and Valley Hospice. He was 90 years old. He was born on August 24, 1931, the son of the late Louie and Susie Lazorak Mark. Robert served his country with pride in the United States Army during the Korean War. Robert nourished his faith at Saint Mary’s Byzantine Catholic Church in Weirton and was a member of the 1949 graduating class of Follansbee High School. Robert spent twenty-five plus years with the Prudential Life Insurance Company in Steubenville. His attention to detail went beyond his office through his actions and the advocacy he had for many people that came into his life. He was a soldier of Christ, doing God’s work on earth. His family describes him as a generous, loving, outgoing individual. The love he had for his family and the attentiveness he exhibited throughout his life made him a special person to many generations. Robert was a true people person, the many days he would spend at Miller’s Driving Range earned him the title of ‘Grip Master.” Often telling tales of his game and sharing many golf stories of golfing trips with friends throughout the years. Robert was preceded in death by the love of his life and devoted wife Mrs. Ethel Rodak Mark on October 18, 2007, son-in-laws Anthony Pusateri and Shawn Schrockman, and nephew Bobby Bailey. Left to cherish Robert’s memory with love and admiration is his son Robert (Stephanie) Mark of Weirton, daughters, Nanette (Bill) King of New Martinsville, Pamela (Michael) Roberts of McDonald, PA., Marina Pusateri of Millheim, PA., Judy Schrockman of Burgettstown, grandchildren Sean(Lisa) Mark Shane (Cassandra) Mark, Johanna (Charles) Ivanac, Jessica (Chad) Duffield, Bill (Eileen) King, Bryan, and Lauren Roberts, Adam (Mohan) Pusateri, Alex Pusateri, Justin, Kristen, Jacob, and Zachary Schrockman, thirteen great-grandchildren and sister Fran (John) Aftanas. A funeral liturgy will be held Monday, February 14, 2022,10:00 AM at the Saint Mary’s Byzantine Catholic Church 3116 Elm Street, Weirton, WV. Fr. Robert Jones will preside. Funeral services can be viewed on YouTube. Interment will follow in Chapel Hill Memorial Gardens. Military Honors will be conducted by the United States Army and the American Legion Post 10 Honor Guard. Memorial Contributions may be made to the Saint Mary’s Byzantine Catholic Church, 3116 Elm Street Weirton, WV., 26062 or Valley Hospice 10686 OH-150 Rayland, OH., 43943. The Measure of your life will not be in what you accumulate, but in what you give away……Wayne W. Dyer. Mr. Mark’s arrangements have been entrusted to the Greco-Hertnick Funeral Home, 3219 Main Street, Weirton, WV. Share tributes at www.grecohertnick.com.
View current weather.