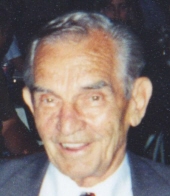 Albert Roman, 86, of Weirton, passed away Wednesday, April 20, 2005 at the Weirton Medical Center. Born March 22, 1919 in Carbondale, PA, he was the son of the late Stanley and Josephine Balcevicz Roman. Albert was also preceded in death by his wife LaRee (Miller) Roman in 1990 whom he married April 19, 1941; brother Bruno Roman and sister Stella Moroz. Albert was a 1939 graduate of Weir High School where he was Captain of the undefeated football team and was selected that year as a WV All State member. With over 40 years of service, Albert retired from National Steel where he was Superintendent of the Structural Mill. He was Catholic by faith and a member of the Pleasant Valley Country Club and Weirton Elks Lodge #1801. He served in the Army Air Corps during World War II as a B-24 pilot. Albert’s survivors include his son Albert E. Roman and his wife Susan of Sarasota, FL; daughter Carol Copenhaver and her husband Joseph of Weirton; granddaughter Sara McGeary and her husband Richard; great granddaughter Hannah McGeary all of Darlington, PA; step granddaughter Heather Hood of Jacksonville, FL; 3 step great grandchildren Madison and Kaitlyn Hood of Jacksonville, FL and Jonathan McGeary of Darlington, PA. The family will receive friends Friday from 2-4 and 7-9PM at the Greco-Hertnick Funeral Home, 3219 Main Street, Weirton, where funeral services will be conducted at 10:00AM on Saturday. Interment will be at Chapel Hill Memorial Gardens in Weirton. Share tributes with his family at www.grecohertnick.com Funeral Home: Greco Hertnick Funeral Home 3219 Main Street Weirton, WV US 26062
View current weather.