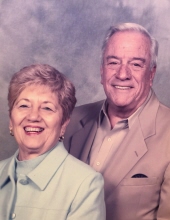 Donald J. Gianni, Sr., 83, and Betty Jane White Gianni, 84 of Weirton died 22 hours apart. With their loving family at their side, Donald died on Monday, January 14, 2019, at the UPMC Presbyterian and Betty died at her home on Tuesday, January 15, 2019. Donald was a son of the late Gaston and Zelmira Nieri Gianni. He was born on January 1, 1936, in Pittsburgh, Pa. Betty was a daughter of the late James and Flora Sebben White. She was born in Weirton, WV on May 21, 1934. Both Don and Betty graduated from Steubenville Catholic Central. Betty was a graduate of the Class of 1952 and Don was a graduate of the Class of 1953. Both were members of the Sodality Club at school and met at a dance sponsored by the Sodality Club. They started dating and were married on May 26, 1956. Together they were blessed with seven children, twenty one grandchildren, eight great grandchildren with three more great grandchildren on the way. Don went to work in April of 1956 for Betty’s father at the James White Construction Company, where he later became the President of the Company. His last day at the office was December 22, 2018. Betty took care of their home and their children. She was a very talented seamstress and was a founder and co - owner of the former Elizabeth’s Bridal Boutique in Weirton. Don and Betty were silent pillars of the Weirton Community often helping others without any fanfare. As a result of all of their philanthropic activities, they were inducted into the Weirton Madonna High School Hall of Fame in 2014. Don and Betty were active members of the Saint Paul Community in Weirton, where they participated in the Holy Name, Christian Mothers, and school PTA. Don was a member of the Knights Of Columbus 3734, The Fourth Degree Assembly, Williams Country Club, former board member of the Brooke Hills Park, Hancock County Workshop and the Saint Paul’s Cemetery. Most of all Don enjoyed meeting Romie Castelli and their friends for breakfast for the past 40 years. Betty was active in the Forget Me Not Twig Card Club, Beta Sigma Phi Sorority, and the BPW, and Four Score Seniors. Later in life, they enjoyed spending time together in the winter months in Florida, They tolerated their seven children, loved their twenty one grandchildren, and absolutely adored their eight great- grandchildren. In the eyes of their grandchildren, the sun rose and set on the love they had for their grandparents. In addition to their parents, Don was preceded in death by his brother, Raymond, and Betty was preceded in death by her husband Don and her sister, Deanna Silvestri. They will be remembered with love by their three sons, Michael Gianni, Robert “Bobby” and Ruth Gianni, and Donald J. “Donnie” and Shelby Gianni, Jr. ; their four daughters, Rebecca “Becky” and Rob Biacco, Carla and Jim Young, Lisa Best and Lori and Jeff Anile; Don’s brother, Gaston and Sue Gianni, Jr. and Betty’s brother, James “Jimmy” and Pauline White, Jr.; 21 grandchildren and 8 great-grandchildren, and three great- grandchildren on the way. Visitation will be 6-8 PM Saturday and 1-3 and 6-8 PM Sunday at the Greco Hertnick Funeral Home 3219 Main Street Weirton, WV Mass of Christian Burial will be celebrated 10 AM Monday at Saint Paul’s Roman Catholic Church, Weirton. Rev. Fr Larry Dorsch and Fr. Babu Joseph Elamturuthil will preside. Memorial contributions may be made to the Weirton Madonna High School or to the Saint Paul’s Roman Catholic Church or School. The Gianni family would like to thank the Valley Hospice and the caregivers that assisted them in the last few weeks. Share tributes and memories at www.grecohertnick.com 304 748 3219
View current weather.