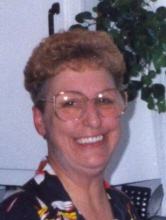 Betty Lou Wise, 65, of Weirton, died Thursday, November 25, 2004 at the Weirton Medical Center. She was born April 7, 1939 in Centerpoint, WV, daughter of the late Clifton C. and Verna R. Cumpston Ritter. Betty Lou was also preceded in death by two brothers, Clinton E. and Jennings L. Ritter. Betty Lou was a homemaker. Years ago, she worked as a nurse’s aid for Weirton General Hospital. She was a member of the Weirton Salvation Army, where she played the piano since 1962. She is survived by her husband, Harley Wise of Weirton, whom she married June 14, 1957; 2 sons Harley Wise, Jr. and his wife Joan of Louisville, KY and David Wise and his wife Mary of Weirton; her two sister Dorothy Wise and Katherine Sue Boring both of Weirton; four grandchildren; three step-grandchildren and two great-grandchildren. Friends will be received Saturday 7-9PM and Sunday 1-3 and 7-9PM at the Greco-Hertnick Funeral Home, 3219 Main Street, Weirton. Additional visitation will be held Monday from 10AM until the 11AM funeral service at the Salvation Army, 794 Cove Road, Weirton with Major and Mrs. Oliver Michaels presiding. Interment will follow at Chapel Hill Memorial Gardens in Weirton. Memorial contributions may be sent to the Salvation Army. Share tributes with her family at www.grecohertnick.com. Funeral Home: Greco Hertnick Funeral Home 3219 Main Street Weirton, WV US 26062
View current weather.