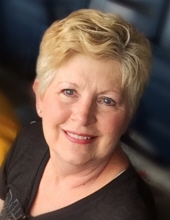 Cheryl Ann (Helt) Newbrough, 61, of Weirton, WV, went home to be with Jesus on June 19, 2017. She passed peacefully at West Penn Hospital, PA, in the presence of her loving husband of 35 years, David Newbrough. Cheryl was born November 7, 1955, in Wheeling, WV, the daugther of John Helt and Esther (Brooks) Carnahan and is survived by her three sons Steve Hess (Lisa), Derek Hess and Bryan Hess (Kelly); step children Noel Newbrough Midgett (Cecil) and David Newbrough, Jr. (Claudia); granddaughters Breanna, Lexi, Kershana and Raven; grandsons Zach, Levi, Colton, Brody and Christopher; two sisters Sheila Beaman and Pamela Johnson and brother John Helt and their children. Cheryl worked at Newbrough Photo as a photo finisher, a role that blessed her life both because it was work she truly enjoyed doing and also because of the relationships it allowed her to build. Cheryl’s greatest delights were her husband, her children and her grandchildren. She will be dearly missed by each of them. Visitation will be Thursday 5-8 PM at Greco-Hertnick Funeral Home, 3219 Main Street, Weirton, WV, where funeral services will be held Friday at 11:00 AM. Reverend Dr. Ed Rudiger will officiate. Interment will follow in Kadesh Chapel Cemetery, Beech Bottom, WV. - See more at: http://www.grecohertnick.com/obituary/Cheryl-Ann-Newbrough/Weirton-WV/1735530#sthash.K84LgVWm.dpuf
View current weather.