Clinton Bernard “Bernie” Hetrick formerly of Weirton, WV, passed away at his home in Macedonia, OH on Tuesday, October 4, 2022. He was 75.

Bernie was born in Waynesburg, PA on October 13, 1946, the eldest of eight children born to Roy and Madaline Harvey Hetrick.

Bernie graduated from Carmichaels Area High School. And shortly after he served his country with the United States Air Force from 1965 – 1969, where he was the crew chief on the C- 130 and C- 133 aircraft.

When he returned to the States, Bernie worked for Westinghouse. While working in Pittsburgh, he met Leona Zagula, a nursing student at Mercy Hospital.  They dated and later married on May 22, 1971.

The couple moved to Weirton, where Bernie provided for his family by working at Weirton Steel on the # 5 Pickler in the Strip Steel. Leona worked outside the home  as a home health nurse for 30 years. In their 51 years of marriage, Bernie and Leona were blessed with two children and two grandsons.

As the children got older, they married and moved from our area. Bernie and Leona wanted to be by family and followed. Their grandsons were and continue to be their pride and joy.

All who knew Bernie enjoyed his sense of humor. He was funny, sarcastic but always caring. He enjoyed watching TV in his recliner, listening to music, eating ice cream and reminiscing about his 57 Lincoln. Most of all he cherished every minute he spent with his family.

In addition to his parents, he was preceded in death by his brother Wilbur and his sister, Madaline “Susie” Hayden.

He will be remembered with love by his wife, Leona; his son, Brian (Amy) Hetrick; his daughter, Kathleen (Paul Weller) Hetrick; his pride and joy, Cameron and Dillon Hetrick; his brothers, Willard (Diana), Roy Daniel (Connie) and Kirk (Michelle) Hetrick; his sisters, Vivian (Jerry) Gould and Karen (Chuck) Brashear.

Visitation will be Saturday from 12 noon to time of funeral at 4:00 PM at the Greco Hertnick Funeral Home 3219 Main Street Weirton

Military honors will be conducted by the United States Air Force and the American Legion Post 10.

Memorial contributions may be made to Sacred Heart of Mary Roman Catholic Church Weirton, WV or to   the Cleveland Clinic Foundation. 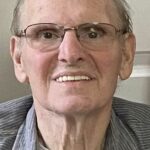