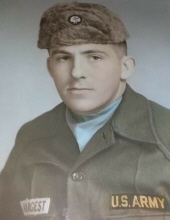 David “Dave” Martin Hargest, 76, passed peacefully, surrounded by family, after an extended illness, on Wednesday September 20, 2017. A US Army veteran, he served tours in both Korea and Vietnam. In Vietnam, he served as a helicopter mechanic with the 134th Assault Helicopter Company. He was born on June 10, 1941, in Steubenville, OH, to the late David William and Mary Vivian Hargest. A talented craftsman, when not working at Weirton Steel, he could often be found working on a vehicle in his garage, or the latest project in his woodshop. His many hobbies included enjoying the outdoors, hunting, fishing, riding motorcycles, and even knitting. He is survived by his daughter, Vivian; his sons, David (Gloria) and Ian; his ex-wife, Ada; his step-daughters, Barb and Brandi; his step-son, Jon; his brother, Robert; step-brother, Jim and grandchildren Caitlin, Connor and Jessica Hargest and Heather and Jaimie Ferguson. He is preceded in death by his wife, Barbara; his sister, Grace; step-sister, Ruth; step-brother Ted. Visitation will be held on Saturday from 2-4 and 6 until the time of funeral services at 8PM, at the Greco-Hertnick Funeral Home, 3219 Main St., Weirton. Pastor Wilmer Olszewski will officiate. Memorial contributions, in memory of Dave, may be made to the Salvation Army Memorial Legacy Fund, 794 Cove Rd., Weirton, WV 26062.
View current weather.