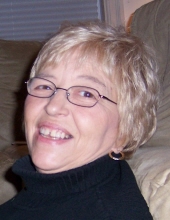 Donna Marie (DeMayo) Merenda,74, of Weirton, WV, passed away, at her home on Thursday, April 29, 2021. Donna was born in Steubenville, OH, on February 10, 1947 to Albert (Palsy) and Anna (Nina Beraducci) DeMayo. She graduated from Steubenville Catholic Central High School in in 1965, and briefly attended West Liberty State College, where she met her future husband, Carl David Merenda. Donna and Carl were married on a very snowy day on February 13, 1971. This was the beginning of 50 years of marriage and Carl’s career with the United States Air Force. Over those 22 years of service, Donna perfected the art of packing, moving and creating a new home across no less than 8 states while raising 3 children, each born in a different state. They eventually settled back in Weirton, WV to be near family. This allowed Donna to work outside her home with a couple of years as secretary to Sacred Heart of Mary School but with a 20+ year career as a financial aid counselor for the Franciscan University of Steubenville where those children became her children. One student in particular, Patrick Prescott, became like a son to her and kept in touch and visited her throughout the years. With her sassy wit, Donna was a strong influence in teaching all she considered to be her children to be independent. If you knew her … you loved her. In addition to her parents, she was preceded in death by two brothers, Albert and Richard DeMayo. She will be remembered with love by her husband, Carl David Merenda, her son, Carl Frank Merenda (fiancé, Jaedra Luke); her two daughters, Nicolette (husband James Mehaffey) and Kristina (husband Michael Redwood); and eight grandchildren, Jamie, Connor, Sophie, Nico, Ava, Gia, Kalen and Rocco. She is survived by younger brother Raymond DeMayo. Visitation will be 4PM until 8 PM Friday at the Greco-Hertnick Funeral Home, 3219 Main Street Weirton, WV. Mass of Christian Burial will be held 10 AM Saturday at the Sacred Heart of Mary Roman Catholic Church 200 Preston Avenue Weirton, WV. Donna will be laid to rest in St. Paul's cemetery. In lieu of flowers, memorial contributions may be made to Sacred Heart of Mary Roman Catholic Church. Share tributes and memories at www.grecohertnick.com
View current weather.