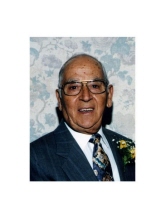 G. Lawrence DeCaria, 94 of 101 Valley Way, former owner of International Market, died Monday, June 26, 2006 at the Weirton Medical Center. He was born November 26, 1911 in Vallelonga Calabria, Italy, a son of the late Francesco and Teresa Garisto DeCaria. In addition to his parents, he was preceded in death by his wife Angelica Dato DeCaria and his nine brothers, Guiseppe, Francesco, Salvatore, Vito, Antonio, Bruno, Monsignor Vincezo, Domenic and Fortunato DeCaria. He was an owner, along with is brother, of the original International Market that opened its doors in the late 1920’s. He was a recipient of the Weirton Sons of Italy Heritage Award in 1994 and the Community of Vallelonga Award in 1997. He was a member of St. Joseph the Worker Roman Catholic Church, St. Joseph Holy Name Society, AARP and a past member of the Weirton Area Chamber of Commerce. Surviving are his sons, Frank L. and wife Sheila Doherty DeCaria, Joseph A. and wife Nancy Peretic DeCaria, Frank J. “Keener” and wife Debbie Schrockman DeCaria and Anthony J. and wife Alice Morelli DeCaria; 12 grandchildren and two great-grandchildren. Visitation will be held Tuesday 7-9PM and Wednesday 2-4 and 7-9PM at the Greco-Hertnick Funeral Home, 3219 Main Street, Weirton, WV. Funeral Liturgy with Mass will be celebrated 11AM Thursday at St. Joseph the Worker Roman Catholic Church. Interment will follow in St. Paul Cemetery. Share tributes and memories with his family at www.grecohertnick.com Funeral Home: Greco Hertnick Funeral Home 3219 Main Street Weirton, WV US 26062
View current weather.