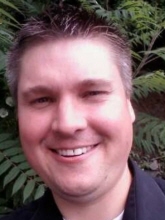 Gary Michael Helba, II of Pittsburgh, PA, formerly of Weirton, WV died Monday July 22, 2013 as a result from injuries sustained from a two car motor vehicle accident. Born on January 31, 1971, in Weirton, WV, Gary was a son of Gary M. and Charlotte Jonczak Helba of Weirton, WV. Gary graduated from Weir High School in 1989 and went on to West Liberty University graduating with a degree in communications. His lifelong dream was to become a Sports Broadcaster, where he recently interviewed with 93.7 The Fan. He worked as a Customer Representative with Verizon Wireless at their Call Center in Cranberry Woods. Gary will always be remembered as a "Kid at Heart", an amazing husband and an amazing best friend. He enjoyed collecting comic books and Star Wars action figures. He also enjoyed the outdoors, where he loved to go hiking and biking. But most of all, Gary enjoyed having season tickets to the West Virginia Mountaineer Football games, and attending them with his father. He was an avid reader of history and was known as the Mr. Fun Facts from his family. Gary was a member of the Mountaineer Athletic Club. In addition to his parents, Gary and Charlotte, he is survived by the love of his life, his wife, Whitney (Donis) Helba, with whom he just celebrated one year of marriage this past June 30th; his four years with Whitney were the best of his life. They are truly soul mates. a brother, Ryan Helba (Lisa) of Carnegie, PA; a sister, Lynette Helba Allen (Brian) of Weirton, WV; 2 nieces who were like his own children, Alexa and Mackenzie Rusinovich; brothers in law, Cory, Mac, and Logan Mellon, and Reiley Donley; sisters in law, Maggie, and Bailey Donley; his beloved dog, Comet and his beloved cats, Wicket and Willow. Visitation will be 6-8 PM Thursday and 2-4 & 6-9 PM Friday at the Greco Hertnick Funeral Home, 3219 Main Street Weirton, WV, where funeral services will be held 11 AM Saturday. Memorial contributions may be made to the Special Olympics or to your local Animal Shelter.
View current weather.