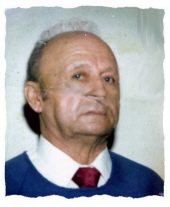 Giovanni Chiodi, 90, of Weirton, passed away Thursday, November 29, 2012 at his home. Born June 9, 1922 in Gallo Matese, Italy, he was a son of the late Antonio and Francesca Boiano Chiodi. He was also preceded in death by his wife Rosa Palumbo Chiodi on September 2, 2001, granddaughter Julie Chiodi, a brother Frank and three sisters, Rosa, Maria, Madelena During World War II, Giovanni served in the Italian Army, and was held a Prisoner of War for 2 years in Hamburg, Germany. He was a police officer while living in Italy. On December 22, 1969 he moved his family to America, where he worked in security for Starvaggi Industries for 19 years. He enjoyed sharing stories with his family and neighbors and loved singing and playing the accordion. He was a member of St. Joseph the Worker Roman Catholic Church. Mr. Chiodi is survived by his sons Anthony, Joseph, Patsy all of Weirton and Dominic of Miami, FL; daughters Maria (Antonio) Ferruccio of Italy and Fran (Donald) Alexander of Wellsburg; ten grandchildren and 4 great-grandchildren. He also leaves his beloved dog Emily. Visitation will be held Friday 4-8PM at the Greco-Hertnick Funeral Home, 3219 Main Street, Weirton, WV. Funeral Liturgy with Mass will be celebrated 5:30PM Saturday at St. Joseph the Worker Roman Catholic Church with Reverend Father Manuel Gelido officiating. Entombment will be in St. Paul Cemetery, Weirton.
View current weather.