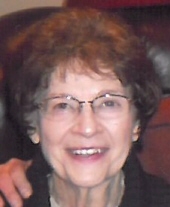 Goldie H. Mamula, 82, of Weirton, WV, a devoted wife, mother, grandmother, and sister passed away on Friday December 4, 2015, at the Trinity Medical Center West, in Steubenville, OH. Born on November 25, 1933, in Aliquippa, PA, Goldie was the daughter of the late, Nikola "John" and Amelia Vuynovich Hayden. She was also preceded in death by her two brothers, Robert and Walter Hayden. A graduate of BTC (Business Training College), Goldie was a trained medical secretary. Prior to her marriage she worked as a secretary for the Dravo Corporation. After her marriage, she joined her husband, at the Richard Mamula Insurance Agency in Weirton, WV. Goldie enjoyed reading, sewing, listening to Serbian music and playing the piano. She could also be found tending to her flower garden or answering her emails on the computer. When her children were young she was involved with the PTA, and enjoyed area bowling leagues. She was a member of the Holy Resurrection Serbian Eastern Orthodox Church, Steubenville, OH, where she taught the children in Sunday School for 20 years. She was also a member of her church's Mother's Club, K.S.S. Sveta Petka, Steubenville and K.S.S. Vidovdan, Weirton. Goldie was a former member of the Saint Elijah Serbian Orthodox Church, in Aliquippa, PA. She is survived by her husband of fifty five years, Richard Mamula; her daughter, Diane Mamula of Imperial, PA; son, Richard H. and Susan Mamula; two grandchildren, Richard A. and Rachael Mamula all of Oakdale, PA; a brother, Chester and Irene Hayden of Center Township, PA; and a sister in law, Lois Hayden of Kissimmee, FL. Friends and relatives will be received Sunday from 1-3 PM and 6-8 PM at the Greco Hertnick Funeral Home, 3219 Main Street Weirton, WV, where Pomen Services will be held at 6 PM. Additional visitation will be 9 AM until time of funeral services at 10 AM, at the Holy Resurrection Serbian Orthodox , Steubenville, OH. V. Rev. Father Rade Merick will preside. Interment will be 2 PM Monday at the Saint Elijah Serbian Orthodox Church Cemetery, Aliquippa, PA. Memorial contributions may be made to the Holy Resurrection Serbian Orthodox Church 528 North Fourth Street, Steubenville, OH 43952. Share tributes and memories at www.grecohertnick.com 304 748 3219
View current weather.