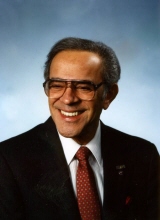 Gus G Diniaco passed away September 2, 2011 at his residence. He was born Sept 1, 1927 in Steubenville, Ohio, the son of the late George and Siestine Diniaco. His brother, Jim, also preceded him in death. In the real estate business for over 50 years, Gus started in sales in Steubenville in 1949 and opened his own office in 1954. He decided to go into appraising and became licensed as a Certified General Real Estate Appraiser in WV, OH and PA. Gus joined the WV Tax Commission as an appraiser and became supervisor of appraisers in 1959. He continued his own business working for several local banks as well as individuals or organizations needing his services for residential or commercial properties. In 1989, he retired from the state but continued his private business until 2001. He was also an advisor for the International Association of Assessing Officers and taught classes for the Society of Real Estate Appraisers. Gus was a merchant marine in the Great Lakes and went on to serve in the US Marine Corp. He was a proud member of the Rotary Club until recent years and was past president of Weirton Rotary in 1977 and past district governor of #7530 in 1992 and 1993. He was also a member of the All Saints Greek Orthodox Church, the Ahepa, Weirton chamber of Commerce, and the Paul Harris Fellow. He is survived by his wife Penny Stakias Diniaco; daughters Tina Gaston and her husband Larry of Colliers, WV, Chrys Diniaco and her husband Floyd Stokes of Atlanta, GA; Grandson, Cody Gaston; and Brother, Louis Diniaco and his wife, Kalope of Steubenville, Oh. Visitation will be 3 ï¿½ 7 pm Monday at the Greco Hertnick Funeral Home, 3219 Main St., Weirton, WV. Additional visitation will be from 10 AM to 11AM the time of the funeral service at the All Saints Greek Orthodox Church, Weirton. Interment will be at The Union Cemetery, Sunset Blvd, Steubenville, Ohio, with Military graveside services conducted by the American Legion Firing Squad. The family would like to thank Dr. Ray Greco for all his years of wonderful care and friendship and the Valley Hospice Staff, especially Amy and Judi for their care giving and love shown to our beloved Gus. Memorial contributions can be made to Valley Hospice, 10686 State Route 150, Rayland, OH 43943.
View current weather.