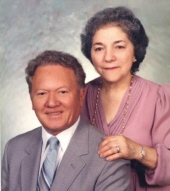 Henry Enrico Muscara, 91, of Weirton, went home to be with the Lord Thursday, April 8, 2004 at the Weirton Geriatric Center. He was born October 29, 1912 in Dennison, OH, a son the late Santo and Catina Lenzo Muscara. In addition to his parents, he was also preceded in death by his brother, Carmello Muscara in 1942. After 46 years of service, Henry retired from Weirton Steel where he worked as a roller in the Tin Mill Department. He was a member of St. Joseph the Worker Roman Catholic Church, Weirton Steel 25 Year Club, Four Seasons, and Knights of Columbus #3734. He also enjoyed gardening, playing cards, traveling, and history. Henry was the beloved husband of Jennie A. (Fasolo) Muscara of Weirton, whom he married June 22, 1935 and the proud father of his children, which include two sons, Sandy R. Muscara and his wife Bertha of Valparaiso, IN and Nick M. Muscara of Weirton and one daughter, Joann Bugin and her husband Charles of Weirton. Henry's other survivors include his brother, Joseph Muscara of Weirton; two sisters, Liboria Lembo and Maria Ioppolo, both of Italy; 8 grandchildren; and 13 great grandchildren. Friends will be received from 7-9 PM Saturday and 1-3 and 7-9 PM Sunday at the Greco-Hertnick Funeral Home, 3219 Main Street, Weirton, where a prayer service will be held 2 PM Sunday. Funeral Liturgy with Mass will be celebrated 9:30 AM Monday at St. Joseph the Worker Catholic Church, Weirton, with Father Stephen Dube presiding. Entombment will follow at St. Paul Cemetery, Weirton. Share tributes with his family at www.grecohertnick.com. Funeral Home: Greco Hertnick Funeral Home 3219 Main Street Weirton, WV US 26062
View current weather.