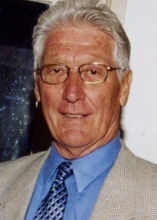 It is with profound sadness that the family of James Joseph (J.J.) Guida announces his passing on Sunday, May 10, 2015, at the UPMC Presbyterian hospital with his family by his side, ten days short of his 81st birthday. It is also with great pleasure that we share he was the most fantastic and loving husband, father, grandfather, son, brother, uncle and friend. He is survived by his wife Rita M. Guida, children Dewey V. Guida, Rosemary Guida, Jamie A. Guida and Daniel J. (Laura) Guida, grandchildren Kelli M. Guida, Lindsay M. Martinez, J.J. Guida, Daniel J. Guida, Jr. and Megan E. Guida and brothers Anthony J. (Shirley) Guida, Sr. and Dewey J. (Karen) Guida, Jr. and many nieces and nephews. His parents Dewey Joseph Guida, Sr. and Rose Marie (Baio) Guida and sister Constance Griffo predeceased him. J.J. was born in Steubenville, Ohio on May 20, 1934, and graduated from Steubenville Catholic Central high school in 1952. He married his wife Rita (Confalone) in 1957 at the age of 22 and raised his family in Weirton. After serving in the U.S. Army and working in Wheeling-Pitt, J.J. moved into real estate sales and development to become one of the most well-respected businessmen and land developers in the Weirton area. He worked in the industry for 51 years, first starting J.J. Guida Realty in 1964, Panhandle Realty in 1966, D & J Development in 1974, Airport Realty in 1991 and more recently, Baby Boomers and Beyond. He was also a local restaurateur, starting Happy Hero with his brother Dewey, which later became Happy's in downtown Weirton. Knowing the importance of the help he received in his early days of business, he was eager to assist others in business endeavors throughout the years. He will always be remembered for his love of life and how much joy he brought to those around him. He had charisma and a presence about him, causing everyone to take notice when he walked into a room. He loved to be with his family and friends, enjoyed food and wine, spent time outdoors either swimming with his grandkids or exercising, listening to music or working on his businesses and new ventures. The past few years he loved going to Pittsburgh Pirates and Cleveland Cavaliers games with his family. He lived a full and happy life and will be sorely missed, but his presence will never be forgotten. Visitation will be Wednesday 4 to 8 PM at the Greco Hertnick Funeral Home 3219 Main Street Weirton, WV Mass of Christian Burial will be held 10 AM Thursday at Saint Paul's Roman Catholic Church in Weirton, where JJ was a faithful member. Entombment will follow at Saint Paul's Mausoleum. Contributions in his memory may be made to: Autism Society of America, 4340 East West Hwy., Suite 350, Bethesda, MD 20814.
View current weather.