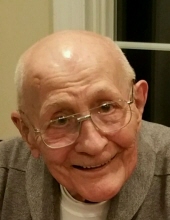 On Thurday, October 26, 2017, John Porec, 94, played his last number, drank his last beer, and told his last story. John‘s life was a success due to his connections with his coaches, friends, and family. Coach Carl Hamill played an integral part of his success. Coach Hamill’s high expectations and no excuses policy helped John excel in the classroom, sports, and life. His mentorship made the difference in John’s life as a father, employee, and friend. John was always grateful to Coach Hamill for taking him under his wing. Born January 19, 1923, in Masury, OH, John was a son of the late Anna Capan Porec and Peter Porec. He was the fourth of eight children. He was also preceded in death by his wife Jeanne Brumley Porec; brothers Frank Porec, Pete Porec and Louis Yakunich; sisters Katherine Porec Matask, Mildred Yakunich Danford and Mary Ann Yakunich Bolen. John was a proud member of the Weir High Class of 1940. He greatly enjoyed attending their reunions and seeing his many friends. Following graduation, John worked at Weirton Steel’s Power Plant and as an office boy. John worked in the Sheet Mill as a member of the Production Planning Department, Foreman, and a General Foreman. While working at Weirton Steel John benefitted from the guidance of two men he highly respected, Benny Jones and John Village. Both men took time to help John reach his potential. He completed his 42 year career with Weirton Steel as the head of shipping in the Strip Steel. Mr. Porec was a United States Army Veteran who proudly served in World War II. Along with his friend, Tiegi Cwiczynski, he was stationed in Iceland where he and Tiegi tried out and made the Army basketball team. The team traveled to England, Scotland, and Ireland where they played exhibition games for the troops. They traveled across the North Atlantic Ocean eight times. The team luckily avoided any German submarines during those crossings. Near the end of his service in the Army he met the love of his life, Jeanne Brumley, on a blind date in Chattanooga, Tennessee. They married four months later and were to celebrate 60 years of marriage when Jeanne sadly passed away. Mr. Porec was a member of the Weirton Steel 25 Year Club and lifetime member of the American Legion. He was the President of the Savages Athletic Organization which began as a sports club when he was a young boy. Many boys from Weirton joined the “Savages” to play sports, go camping, and hang out together. The Savages maintained their friendships throughout the years. They always saved the last Saturday in August for their annual picnic and lamb roast held at John’s farm. John’s lifelong friend, Aurdis “Fatz” Fazi, always helped with preparing and cleaning up for the event. John and Fatz ‘s have been friends for close to 90 years. He is survived by his daughter Elizabeth Ann Ferber and son-in-law Michael Ferber of Houston, TX, his son Dr. John Paul Porec and daughter-in-law Karen Porec of Olympia, WA, and his daughter Carol Jeanne Kahler and Cmd. (Ret.) Robert Kahler of Blacksburg, VA. He is also survived by his granddaughters Michelle Ferber Nelson of New Orleans, LA, and Alexandra Louise Ferber of Houston, TX and sister Margaret “Babe” Yakunich Robinson of Colliers, WV. Visitation will be held Thursday night from 6-8 pm and Friday from 10am until the 11am service at Greco-Hertnick Funeral Home, 3219 Main Street, Weirton. All family and friends are invited to attend. Burial will follow at Chestnut Ridge Cemetery, Florence, PA. The family would like to thank Vera Pardasie for her never-ending dedication to assist our father. Thanks to the staff of Heritage Hall of Blacksburg, Virginia for their patience and care throughout his stay. Special regards go out to neighbors Jim Pratt and John Anderson both of Swearingen Hill. Thank you for your time, hard work, and friendship over the years. Share tributes at www.grecohertnick.com
View current weather.