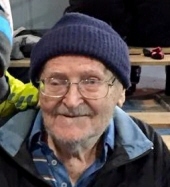 John W. Puskaric, 92, of South Park, PA, died Sunday June 21, 2015, at his home. Born on January 12, 1923, in McKeesport, PA, John was the son of the late Dane and Mildred Bozeiavic Puskaric. His father passed away in 1952 and his mother in 1976. He was also preceded in death by his sister, Catherine Marsh, on November 14, 2004. John served in the United States Army , as a radio operator, and fought in the Battle of the Bulge, America's bloodiest battle of World War II. He retired after over 40 years with United Airlines, where he started as a Radio Operator and retired as a Load Planner with the airlines. His love for radios and computers carried with him throughout his life. He also found enjoyment canoeing on the local waterways, and biking. John is survived by his sister, Ellie Hayes, of Belle Vernon, PA; his four nephews, Fred, Bill, Eric and John Marsh and one niece Kathy Berkoben Funeral graveside services will take place on 1 PM Wednesday at the Sacred Heart Cemetery, Port Vue, PA. Rev. Fr. Michael Maranowski will preside. Share tributes and memories at www.grecohertnick.com
View current weather.