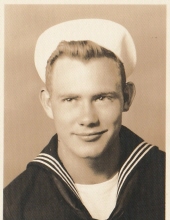 Joseph Fabianich, Jr., of Weirton loving husband, father, and grandfather, passed away on Tuesday, September 13, 2022. He was 97 years old.

He was born on December 28, 1924, one of two children to Joseph and Margaret Fabianich.

Joseph served his country honorably in the United States Navy from 1943-1946. Joe served as a Motor Machinist’s Mate Second Class, USNR on the USS YMS 293 minesweeper. He also served in a combat zone on an aircraft carrier in the Pacific Theater.

Joe was Catholic by faith but became a member of the Cove United Presbyterian Church during the last 15 years of his life. Joseph worked for the former Weirton Steel in their Tin Mill for forty years. He was a member of the 1943 graduating class of Weir High School, the Weirton Steel 25-year Club, and American Legion Post #10. He also attended two years of college at the University of Steubenville after the War.

Joe loved life and traveling. He would travel to the western United States including California and Las Vegas as well as parts of Mexico. He also loved to travel to Maryland to see his best friend and God children. Joe never lost his love for traveling even in his later years and never stopped talking about his next trip. Joe never knew a stranger. He met many friends during his travels and continued to stay connected with them.

A man of strength and determination, he never lost his smile or his determination to live. He was always smiling and loved to make others smile. Shortly before his passing on Tuesday, he was visiting with friends and family, and he still had his smile. He lived every day full of positivity and courage. He had a generous and gentle heart and assured all were taken care of that were around him and had an exceptional appreciation for everything anyone did for him. Joe never thought of himself as a hero, but a Hero he was.

He will be deeply missed by not only his family but by all of his friends that loved him as well.

Joe was a great animal lover. He enjoyed feeding the birds and squirrels. He will be missed by the family pets as well.

Joe’s hobbies included working out and staying active. He loved shopping for bargains and was an avid Weir High Football fan.

In addition to his parents, Joseph was preceded in death by his wife of 57 years, Mabel Marcella Ott Fabianich, and his brother Milton Fabianich.

Left to cherish his memory with love and admiration are his daughter Terry Kiser, grandson Justin Stemple, and his special nephew Frank Fabianich whom he loved like a son. He is also survived by many nieces, nephews, family, and friends.

Friends may visit with the family on Sunday, September 18, from 4 -7 PM at the Greco-Hertnick Funeral Home, 3219 Main Street Weirton, where funeral services will be conducted Monday at 11 AM.

The entombment will be in Chapel Hill Memorial Gardens.

Military honors will be provided by the United States Navy and the American Legion Post #10 Honor Guard.