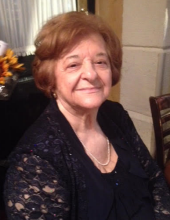 Lena Brancazio Paolo, 92, of Weirton died at her home on Wednesday, December 20, 2017. Born on August 14, 1925 in Yorkville, Ohio, Lena was the daughter of the late Pasquale and Angela DiLullo Brancazio. In 1947, Lena married the love of her life, Anthony (Tony) Paolo, with whom she celebrated 70 years of marriage in June of this year. A graduate of Weir High School, Lena was one of Weirton’s first telephone operators and worked as a medical secretary and assistant for the late Ray S. Greco, M.D. for 18 years. She committed herself fully to every role she undertook, professionally and personally, and did so with total resolve, competence and a smile. Described by a friend as a “beautiful and noble soul,” she was a courageous, selfless, generous woman who embraced life fully and weathered illness with unflinching hope and dignity. Her passion and joy in her life was her family and extended family. Her devotion to them knew no boundary. But her love was not limited only to family. No one she met or who entered her home was a stranger, nor did anyone leave without her trying to feed them or give them something to take with them. She was a member of Saint Joseph the Worker Roman Catholic Church and was at one time a member of the Christian Mothers. Lena believed strongly in equality and justice for all people and lived her life accordingly. She was a gourmet cook, enjoyed music, dance, and watching Turner Classic movies and CNN. She was preceded in death by her sisters Domenica (Minnie) Mozzone and Mary Rollison and her five brothers John, Antonio, Dominic, Joseph and Cosmo Brancazio. She is survived by her husband, Tony, her children, Bernadette Paolo, previously of Washington, DC, Thomas Paolo and her daughter-in-law Darlene Paolo of Bethel Park, Pa.; her grandchildren, Carla (Chris) Sweeney of Charlotte, NC, Dena (Dave) Robinson of Sterling, VA, and Tony Paolo (Samatha) of Pittsburgh, PA; her great-grandchildren Cole and Natalie Sweeney, Alexander and Charles Robinson; her sister-in laws, Helen Paolo and Helen Brancazio, and many nieces, nephews, cousins and close friends. Visitation will take place at the Greco-Hertnick Funeral Home on Friday, December 22 from 2:00 to 4:00 pm and from 6:00 to 8:00 pm. Mass of Christian Burial will be celebrated at Saint Joseph the Worker Church at 10:00 am on Saturday, December 23. Interment will follow in St. Paul Cemetery, Weirton. The family wishes to acknowledge and thank all of Lena’s caretakers and those who have extended such kindness during her convalescence. Expressions of sympathy can be donated to Saint Joseph the Worker Church. “She was powerful not because she wasn’t scared, but because she went on so strongly despite the fear.” Atticus. Share tributes and memories at www.grecohertnick.com
View current weather.