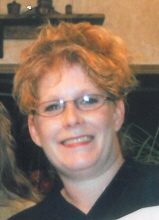 Lori A. Hardwick Monroe, 44, of Lancaster, OH, formerly of Weirton, WV, died Saturday, February 18, 2017, at Pickering House in Lancaster, OH, with her family by her side. Born August 27, 1972, in Weirton, WV, she was a daughter of the late Larry Hardwick and Linda Eafrati. She was also preceded in death by her step father Dave "Fritz" Eafrati. Lori's greatest joy in life was her family. She loved spending time with her children and grandchildren, especially coloring with her grandchildren. She is survived by her husband Fred Monroe of Lancaster; son Brian Monroe of Toronto, OH; daughters Jodi Monroe of Lancaster and Cierra Hardwick of Newark, OH; brother Chris Hardwick of Toronto, OH; sisters Carrie Scheetz (Rick) of Weirton, Eva "Cory" Hardwick Wallace (Chris) of Pleasantville, OH, and Tracy Hanifin (George) of Kingsport, TN, and seven grandchildren. Per Lori's requests, there will be no visitation and private services will be held at the discretion of her family. Donations may be made to Fairhope Hospice, in memory of Lori Monroe, 282 Sells Road, Lancaster, OH 43130. Funeral Home: Greco Hertnick Funeral Home 3219 Main Street Weirton, WV US 26062
View current weather.