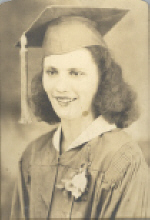 Margaret B. 'Marge' James, 80, of Weirton, died Monday, September 20, 2004 at Barbara Hatch Home Care. Born July 6, 1924, She was the daughter of the late Peter and Caroline Steffan Nagy. In addition to her parents, was preceded in death by her brother Joseph Nagy and sister, Helen Krivak. Marge was a homemaker and a very special Gee Gee. Marge’s survivors include her husband Elmer Lee James, whom she married April 9, 1947; sons Ken James and his wife Mary Lou and Gerald A. James and his wife Nancy; sister Ida Vargo; sister-in-law Elizabeth Nagy and grandson Ken James II, who was the “light of her life”, all of Weirton. She also leaves several nieces and nephews. Friends will be received Thursday 2-4 and 7-9PM at the Greco-Hertnick Funeral Home, 3219 Main Street, Weirton. Funeral Liturgy with Mass will be celebrated at 12 Noon Friday at St. Joseph the Worker Roman Catholic Church. Entombment will follow at St. Paul Cemetery Mausoleum, Weirton. Share tributes with her family at www.grecohertnick.com.
View current weather.