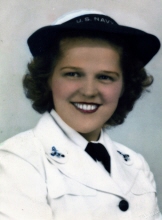 Margo Danchison, 90, of Weirton, WV, died Sunday April 10, 2011, at the Weirton Medical Center. Born April 21, 1920, in Mingo Junction, OH, Margo was a daughter of the late George and Anna Janasko Kaschak. She was also preceded in death by her husband, John Danchisin,; brothers, George , Michael , and John Kaschak; sisters, Mary Kaschak, Anna Clark, and Elizabeth Gratson. A homemaker, Margo was formerly a cosmetologist at the Hub in Steubenville. She served her country during World War II in the United States Navy. She was a Navy WAVE stationed at Bethesda Naval Hospital. She was a member of Saint Mary's Byzantine Catholic Church, where she formerly sang in the choir, and was a member and Past President of the Altar and Rosary Society. Margo was also a member of the Four Seasons, and the American Legion Post 10. She is survived by her daughter, Carole Ann (Dennis) Cunningham of Mineral Wells WV; her brother, Nicholas (Kathryn) Kaschak of Steubenville, OH; her sister, Martha (George) Katich of Follansbee, WV; her two grandchildren, Ted Cunningham of Marietta, OH and Danica Cunningham of Mineral Wells. Visitation will be 2-4 & 6-8 PM Tuesday, at the Greco Hertnick Funeral Home, 3219 Main Street Weirton, WV. Parastas service will be 7:30 on Tuesday. Panachida Service will be 10:30 AM Wednesday in the funeral home. Funeral Liturgy will be celebrated 11 AM Wednesday at the Saint Mary's Byzantine Catholic Church 3116 Elm Street Weirton, WV Interment will follow at the Highland Hills Memorial Gardens, Follansbee, WV, with military honors by the American Legion Post 10 Honor Guard. Share tributes and memories at grecohertnick.com
View current weather.