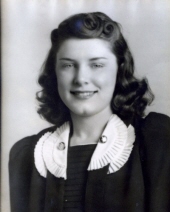 Marjorie Louise Albert Black was born on June 7, 1917 in Holidays Cove, WV and went to be with her Lord on October 13, 2012, while surrounded by her loving family, in Weirton, WV. She was 95 years young. The daughter of the late Leon Albert and Celia Crowe Albert was a Holiday's Cove/Weirton resident her entire life, and a dedicated member at Cove United Presbyterian Church. She was happily married to the late Nelson R. Black, who passed away in 1969. She is also preceded in death by her brother Darrell Albert of Greensburg, PA, brother in laws James Black (Ruth) of Weirton and Raymond Black (Edith) of Steubenville. "Marge" never remarried, but remained a loving mother to Marjorie Black LeMasters, who, along with her husband Mark E. LeMasters, also resides in Weirton. Marge was a lifelong member of Cove Presbyterian Church, singing in the choir and participating in the bell choir as well as a member of the church's Presbyterian Women's Association and the Myrtle McHendry Sunday School Class and Church Women United. She was also a lifelong member of the Weirton branch of the Eastern Star Organization, the Jr. and Sr. A.R.E.M.E. Club, the Weirton Jr. and Sr. Women's Club, Women's Golf Association of Pleasant Valley Country Club, the Holiday Lanes Women's Bowling Association, the Red Hat Society and multiple bridge clubs (she was a master race horse rum player). A 1934 graduate of Weir High School and a local business college, Marge was an employee of Weirton Steel prior to her marriage and a homemaker after her marriage. Marge spent many wonderful summers at Lake Austin swimming and skiing and surrounded by her family and friends, and is remembered fondly by many other families who grew up around the lake area. Marge enjoyed traveling, was a theater fan and frequently enjoyed going to see various shows over the years. In addition to her daughter and son-in-law, Marge leaves behind a legacy of surviving family members, including her granddaughter Stephanie M. LeMasters McVicker and husband Chris K. McVicker and their son Benjamin Markus McVicker of Weirton, and granddaughter Ashley E. LeMasters of Cross Lanes, WV, who were the joy of her life, and affectionately referred to her as "GDawg." Marge could often be found by her granddaughters' sides, cheering for them on the sidelines, playing board games, cooking and watching her beloved WVU Basketball team or the Pittsburgh Steelers and Pirates. She is also survived by sister in law Rosemary Scanlon Albert of Greensburg, PA, nephew J. Thomas Black (Jane Pesta Black) of Huntersville, NC; niece Marcee Albert Radakovich (Keith) of Greensburg, PA; niece An'Etta Black Neff (Thomas) of Waynesburg, PA; and nephew John Albert (Kris) of Orlando, FL; great-nieces and nephews Lauren Radakovich, John Radakovich, Emily Zelando (Joe) and their children Julia and Tyler; Eric Black (Stacy) and daughter Kelsie; Karly Albert; Benjamin Neff; Jennifer Neff and her children Alanea and Tucker; cousins Connie Jo Caravasos (Jim) of Morgantown, WV; Herald Crowe (Leona) of Morgantown, WV; and Jaretta Faust of Carlsbad, NM. She considered her son-in-law's LeMasters family her own, and their "Molly" is loved and survived by dozens of them who adored her and welcomed her as part of their family without hesitation. In lieu of flowers, Marge's family is requesting donations to Cove United Presbyterian Church, 3404 Main Street, Weirton, WV, 26062. Visitation will be held on Monday, October 15, 2012 from 4pm to 8pm, and on Tuesday, October 16, 2012, from 11am until time of funeral services at 12 Noon., at the Greco Hertnick Funeral Home, with Rev. Dr. Ed Rudiger. Graveside services will immediately follow at Chapel Hill Memorial Gardens in Weirton. Eastern Star Services will be held Monday Evening at 7:30, in the funeral home. The family would like to say a special thank you to the friends and staff of Weirton Geriatric Center, who made her last few years comfortable and full of love and support.
View current weather.