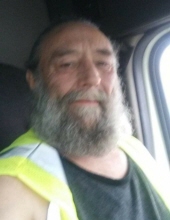 Mark Timothy Taylor, 62, of Weirton, passed away suddenly on May 20, 2019 in Statesville, NC. The firstborn son of Reverend Marvin and Kathern Taylor, Mark was born on October 5, 1956 in Dayton, Ohio. He was a 1974 graduate of Weir High School. He served in the United States Navy as a Seaman First Class on the USS Blandy (DD-943) from 1974- 1978. Mark held many positions at corporations including International Mill Service and Youth Services Systems, Inc. Later in life, he found a passion for truck driving and living his life on the open road, as he drove for Western Express of Nashville, TN. He is survived by his parents who loved and supported him unconditionally. His dearest friends, Mark is also survived by his four brothers, Joseph (Cynthia) Taylor of Strongsville, OH, Thomas (Roberta) Taylor, Philip (Linda) Taylor, Daniel (Christine) Taylor, all of Weirton, WV, as well as several nieces and nephews, and a slew of cousins whom he loved dearly. Mark is also survived by his greatest joy, his children; His first baby- Aimee (Dan) Miscuk; his best friend-Joshua Mark Taylor, both of Weirton, and his pride and joy- Laura (Lala) Rozalee Taylor-Viars of Huntington, WV, three grandchildren; Madeline, Curtis, and Noah; six step-children, including his beloved Caca, and his constant furry companion, an American Bulldog named Daisy. The true loves of his life were his children and grandchildren who gave him his greatest title, “Pappy Mark”. He was known for being a charming, fun-loving man with an infectious laugh and smile. He was a hard-core Pittsburgh Steelers fan with deep conservative roots of which he was very proud. Above all, he never gave up his love of classic rock and roll- his favorite gift to pass on to his children. Visitation will be held at the Greco-Hertnick Funeral Home, Weirton, on Friday, May 24, from 3 p.m. to the time of service at 6 p.m. Pastor Drew Bush of Chapel Hill Wesleyan Church will officiate. Share tributes and memories at www.grecohetnick.com. 304-748-3219.
View current weather.