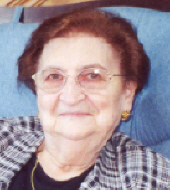 Mary Bernabei, 87, of Weirton, died Friday November 26, 2004, at the Weirton Medical Center. She was born on August 8, 1917 in Aguia Province of Secinara, Italy, the daughter of the late Angelo Santi Fabian and Pasquala Fabian. Mary was also preceded in death by her two sons Angelo, at the age of four, and John Bernabei on November 7, 2004; her daughter, Angela Bernabei, on December 6, 2003; one brother, and two sisters. Mary was a retired owner and operator of the former Bernabei’s Grocery Store in Weirton. She was a member of Saint Paul Roman Catholic Church in Weirton, and the Christian Mothers. She was also a member of the Four Seasons Senior Citizens Club. Mary was the greatest mother, grandmother, and great grandmother. She was truly a good person. She is survived by her son Patsy Bernabei , and his wife Marie of Toronto, OH; a daughter in law, Mrs. John ( Nancy) Bernabei of Weirton; four grandchildren, eight step grandchildren, five great grandchildren, 19 step great grandchildren. Visitation will be 7-9 PM Monday at the Greco Hertnick Funeral Home 3219 Main Street Weirton, WV. Funeral Liturgy with mass will be celebrated at 10 AM Tuesday at the Saint Paul Roman Catholic Church, Weirton. Interment will follow at the Saint Paul Cemetery, Weirton Share tributes with her family at grecohertnick.com Funeral Home: Greco Hertnick Funeral Home 3219 Main Street Weirton, WV US 26062
View current weather.