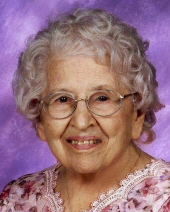 Mary Sarap Vukelich, 100, of Weirton, WV, born on August 23, 1908 in Mingo Jct., OH passed from this life on Friday, December 12, 2008, at the Weirton Medical Center, surrounded by her family. Mary was the only daughter and eldest of 9 children born to Nicholas and Angeline (Kumlenich) Sarap. Before her death, Mary was the oldest living member of her church, the Holy Resurrection Serbian Eastern Orthodox Church in Steubenville, OH. As a young girl, Mary sang the liturgical responses in the old Mingo Jct. Serbian Eastern Orthodox Church. Mary was instrumental in the formation of her church's first Kolo, as the minutes that she wrote read "The KSS's first meeting was held in the church's meeting room on February 4, 1930. The minutes reflected Mary Sarap holding the office of Secretary/Treasure. During her youth Mary's family moved to Steubenville, OH, where she attended Steubenville City Schools. She later graduated with honors from the Steubenville Business College in the 1920's. After graduation, Mary began working in the Steubenville Office for Weirton Steel, as an accountant. She was later promoted as the head accountant in the main office located in Weirton. Mary remained working in the Weirton Office for Weirton Steel until her marriage to Pete Vukelich on June 30, 1943. Mary has lived in Weirton since her marriage, where she enjoyed sewing, crocheting and making professional draperies for many people locally, as well as many throughout the United States. Mary was preceded in death by her parents; her husband Pete on August 7, 1979, and seven of her eight brothers, Nick, Mike, George, Dushan and Pete Sarap all of Steubenville, OH; two infant brothers, one named Dushan and one unnamed who died at birth. Mary is survived by her two sons and their families of Weirton, George and Diane (Schultz) Vukelich and Nick and Pam (Dyson) Vukelich; her granddaughter, Michelle; her great granddaughter, Kaylin Ray; and her brother Louis Sarap of Steubenville, OH. Help celebrate Mary's life during the hours of 6-8 Saturday December 13, 2008 and 1-3 & 6-8PM Sunday December 14, 2008, at the Greco-Hertnick Funeral Home, 3219 Main Street, Weirton, WV. Pomen Services will be held Sunday Evening at 7PM in the funeral home. Additional visitation will be held 10:30AM until the time of Funeral Liturgy at 11AM on Monday, December 15, 2008 at Mary's Church, the Holy Resurrection Serbian Eastern Orthodox Church, 528 North Fourth Street, Steubenville, OH. The Very Reverend Father Rade Merick will preside. The final resting place for Mary will be in the family plot at the Chapel Hill Memorial Gardens in Weirton, WV. Memorial contributions may be made to her church, the Holy Resurrection Serbian Eastern Orthodox Church, Valley Hospice or Hancock County Senior Center. Funeral Home: Greco Hertnick Funeral Home 3219 Main Street Weirton, WV US 26062
View current weather.