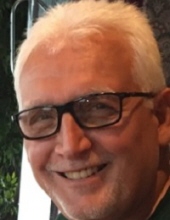 Michael R. Petrovich Sr., 70, of Weirton died Wednesday May 17, 2017, at UPMC Presbyterian in Pittsburgh, PA. Born on June 27, 1946, in Steubenville, OH, Michael was the son of Dorothy Alexander Petrovich of Weirton, WV,and the late Eli "Otts" Petrovich. A Navy veteran of the Vietnam era, Michael returned to Weirton and worked for Weirton Steel where he retired as a mechanic in the Company Garage. Mike was an avid golfer who enjoyed a daily round of golf during golf season at Mountaineer Woodview Golf Club. He golfed many years in the Weirton Steel League. The two highlights of his golfing career came when he and his son had the opportunity to play Augusta National Golf Club, not once but twice. In his earlier years he enjoyed bowling in the Weirton Steel leagues. But most of all Mike loved his wife and family and treasured being Pap Paps to his grandchildren. He had the pleasure of attending many of their events. Mike was a member of Saint Joseph the Worker Roman Catholic Church, and the Knights of Columbus 3734. In addition to his mother, Dorothy, Mike is survived by his loving wife, who he married on September 7, 1968, Janice Marie Nichols; his two sons, Christopher Michael Petrovich (Heather) of Bruceton, Mills, WV and Michael Robert Petrovich, Jr. (Jennifer) of Lexington, SC; his daughter, Michelle Marie Rockhold (Chad) of Colliers, WV; his sister, Helen Petrovich of Weirton, WV; his five grandchildren, Taylor, Gunner, Caleb, Gage and Kyler; and numerous nieces, nephews, cousins and friends. Visitation will be 4-8 p.m. Sunday at the Greco Hertnick Funeral Home, 3219 Main Street Weirton, WV. Mass of Christian Burial will be celebrated 10 a.m. Monday at Saint Joseph the Worker Roman Catholic Church, 229 California Avenue, Weirton. Interment will follow at Highland Hills Memorial Gardens with military honors by the American Legion Honor Guard and the U.S. Navy. Memorial contributions may be made to the Table of Hope, 3301 West Street, Weirton, WV 26062.
View current weather.