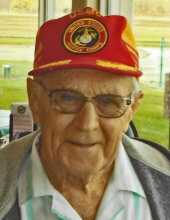 Mike Veselica Jr., formerly of Letart, WV, passed away on August 6, 2017 at the age of 96 years, under the loving care of his family, the RidgeCrest Health Campus staff, and Great Lakes Caring Hospice in Jackson, MI. Mike was born to Mike and Mildred (Woulitich) Veselica on April 22, 1921 in Duncanwood, Ohio, the eldest of nine children. On May 25, 1940, Mike married Elizabeth Blake in Letart. They lived in Weirton, WV, until retiring to Letart in 1980. Elizabeth preceded Mike in death in 2003 after 63 years of marriage. Mike proudly served his country during WWII in the 2nd Marine Corp. Service Battalion from 1943 through 1946. His service took him to Hawaii, Saipan, and Nagasaki, Japan. His division was involved in the invasion of Okinawa where his ship was hit by a Japanese kamikaze plane. Mike retired in 1981 as Superintendant of the Coke Plant at Weirton Steel after 41 years of service. He also worked for many years part-time at Greco Plumbing and Heating in Weirton. Mike was an active member of the United Methodist Church in New Haven, WV, serving the church in many capacities. He was a life member of the Odd Fellows, a 50 year member of the Masons; and a 50 year member of the Osirus Shriners. As a young man Mike enjoyed roller skating. He had a strong interest in gardening and repairing Gravely tractors and old lawn mowers. His neighbors called him “Mowing Mike”. He loved auctions and flea markets, and especially enjoyed his morning get-togethers with friends and neighbors at the Country Corner Cafe in Letart. Mike is survived by his son, Gary, and daughter-in-law, Janalee Veselica, of Clarklake, MI; his siblings Mildred (George, deceased) Drazik, Burgettstown, PA; John (MaryAnn) Veselica, Valparaiso, IN; Helen (William, deceased) Marino, Weirton, WV; Bertha (James) Zerkle, Weirton, WV; and Rodney (Betty, deceased), Gainesville, GA. Also surviving are grandchildren Shelly Benfield and Kevin (Julie) Brown; great grandchildren Parker Benfield, Jacob Brown, and Nicholas Brown; his special friend Ruth Shingleton of Ravenswood, WV; and many nieces, nephews, and cousins.. In addition to his parents and his wife, he was predeceased by his siblings George Veselica, Mary (John) Miller, and Sarah (George) Chlomoudis. We would like to extend special thanks to the staff at RidgeCrest Health Campus and Great Lakes Caring Hospice for their loving and skilled care of Mike for the past several years. A very special thank you goes to Mike’s neighbors Greg and Nancy Wamsley and their boys Zack and Zane, who were like family to him and looked after him after Elizabeth’s passing. Visitation will be on Friday, August 11, 12:00 to 1:00 pm, followed by funeral services at the Anderson Funeral Home, 174 Layne Street, New Haven, WV. Internment will be at the Evergreen Cemetery in Letart with military honors by the Mason VFW. Luncheon to follow at the United Methodist Church in New Haven. In lieu of flowers, donations may be made in Mike’s memory to the Shriner’s Hospital or to a charity of your choice.
View current weather.