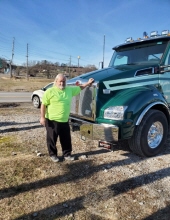 Nicholas Samuel Cosenza, III, 62, of Weirton died Sunday, February 16, 2020, at the Allegheny General Hospital, Pittsburgh, PA. Nick was born in Weirton, WV, on November 30, 1957. At an early age, Nick started working around cars. At the age of 25, with two hundred dollars in his pocket and a lot of talent in autobody repair, Nick went into business for himself. Over the years, Nick's Auto Sales and Rebuilders has not only become a well-known business in the Tri-State Area but a world-renown authority for expertise in towing and recovery. When you met Nick, it would not take long to notice the love he had for his daughter, Jodie, and his grandson, Nicholas. A man who truly loved his work and took great pride in his fleet, Nick will be remembered for his warm smile and generosity to others in need. Nick was preceded in death by his father, Nicholas S. Cosenza, II, and his brother, Ronald “Ron - Ron” Richards. Nick will be remembered with love by his daughter, Jodie Snodgrass, and her husband, Bryan, and their son, Nicholas; his brothers, Richard "Rick" Cosenza (Sandy), Harry Richards (Lisa), Nicky Lee and Patsy Cosenza; sisters, LaDonna Orlando, Carrie Ellison (Cody), Anna and Shirley Cosenza; and his stepfather, Ronald Richards (Jan). Visitation will be 6-8 PM Friday at the Greco Hertnick Funeral Home 3219 Main Street Weirton, WV. Mass of Christian Burial will be celebrated at 10:00 AM Saturday at Saint Paul's Roman Catholic Church. Interment will follow at Saint Paul’s Cemetery. Share tributes and memories at www.grecohertnick.com
View current weather.