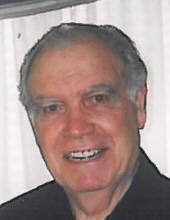 Pete J. Bernardi, a retired steelworker and masonry artisan of Weirton, died Sunday, August 23, 2020, at the Weirton Geriatric Center. He was 91 years old. Pete was born May 30, 1929, in the Village of Pedicciano L’Aquila, Italy, the first born son of the late Luigi and Assunta DelGuzzo Bernardi. As a young boy at the age of 7, Pete, along with his mother, Assunta, journeyed to America to join his father, Luigi, who was already residing in the United States, and they settled in the town of Weirton. He attended Weir High School and served his country in the United States Marine Corp. After his Marine Corp service, he attended Masonry School. It was at this time that he met and married his wife of 69 years, Consiglia (Connie) Notarantonio. They married on October 7, 1950. Pete was then hired by Weirton Steel Corporation, where he worked for 32 years. He also continued to do masonry work as a side job building custom fireplaces for many area homes. Pete and Connie made a beautiful life in Weirton and were blessed with three children: Peter (Linda Cline) Bernardi and Anthony (Lori) Bernardi, both of Weirton and Sandra (Robert) Coram of Wheeling. Pete was a member of St. Joseph the Worker Catholic Church, Knights of Columbus #3734, ISDA Weirtonian Lodge, and the Weirton Steel 25-Year Club. Pete was a tireless worker, but he did enjoy hobbies in his spare time, such as wine making and gardening. His most favorite pastime was playing bocce ball with his fellow Knights in the K of C Bocce League, where he was a member of “The Italians”. The “Italians” were tough competitors and their team won numerous championships over a span of 40 years. One of the highlights of Pete’s life was the 90th birthday party held in his honor just last year. He was surrounded by family and friends, sharing a traditional Italian meal and, of course, wine. It couldn’t have been a more perfect day. Pete is survived by his devoted wife, Connie and his brothers Louis (Carol) Bernardi of Weirton and Jack Bernardi of Pasadena, MD. Pete will be remembered with much love by his grandchildren, Bryan (Melissa) Bernardi, Jamie (Bryant Rujak) Bernardi, Stacie (Mike) Van Rossem, David and Emily Coram, Kayla (Eric) Violet, Staci (Pat) Breen, and Molly (Jonathan) Dobbins. He was blessed with loving great-grandchildren, Layla, Lucas, Landon, Lilly, Luna, Rudy, Gino, Harper and Archer. He was also cherished by wonderful nieces and nephews who would always come by for a visit. Pete was lovingly referred to as “The Chief” and could always be counted on to take charge, lend a hand, or to provide wise counsel. Private visitation for family and friends will be held at Greco-Hertnick Funeral Home, 3219 Main Street, Weirton, WV Wednesday, August 26, 2020 from 9 until 11am. Mass of Christian Burial will follow at St. Joseph the Worker Roman Catholic Church, 229 California Avenue, Weirton at 12:00 PM. Entombment will follow in St. Paul Cemetery. The Bernardi family would like to extend their gratitude to Dr. John, Dr. Cherian and staff for their loving care and to the Weirton Geriatric Center for their compassionate care while Pete was a resident there. Memorial contributions in Pete’s honor may be made to St. Joseph the Worker Roman Catholic Church. Share tributes and memories at www.grecohertnick.com 304-748-3219
View current weather.