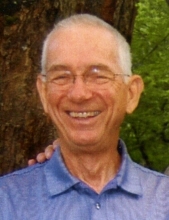 Raymond Gene McKitrick, 79, of Weirton, passed away Friday, June 05, 2015 in the Weirton Geriatric Center. Born on May 17, 1936, in Weirton, WV, Ray was a son of the late Eugene and Grace McGaughey McKitrick. He was also preceded in death by his first wife, Shirley Lee Jones McKitrick on July 5, 1979, and his brother, Robert McKitrick. With 36 years of service, Raymond retired from Weirton Steel, where he was the Superintendent of the Sinter Plant. Even though Ray enjoyed working, his family and his faith were the most important parts of his life. In his leisure time he cherished the times he spent on the golf course with his golfing buddies. Ray was a very active member of the Trinity United Methodist Church, where he served on the Board of Trustees. He was also a member of the United Methodist Men. He is survived by his wife Lucy Schiffer McKitrick of Weirton; son William (Amy) McKitrick of Charles Town, WV; daughters Judith (Wesley) Compton of New Cumberland, WV, Sue (J.J.) Bernabei of Weirton, Amy (J.J.) Furman of East Liverpool, OH, Amanda (Patrick) Totten of Weirton, his brother, Richard "Dick" McKitrick , and his wife, June of Paris, PA;and his twelve grandchildren, Chase, Austin and Michael McKitrick, Stephanie and Paige Pittinger, Anthony, Audra, and Abigail Bernabei, Zac Campbell, Allyson Furman, Owen and Ellie Totten. Visitation will be held Sunday 1-3 and 6 - 8PM at the Greco-Hertnick Funeral Home, 3219 Main Street, Weirton. Additional visitation will be held Monday 10 AM until time of funeral services at 11 AM, at the Trinity United Methodist Church, 300 Ridge Avenue New Cumberland, WV 26047. The Reverend Michael J. Rowe will officiate. Memorial contributions may be made to the Alzheimer's Association, P.O. Box 96011, Washington, DC 20090-6011 or to the Trinity United Methodist Church 300 Ridge Avenue, New Cumberland, WV 26047. Share tributes and memories at www.grecohertnick.com 304-748-3219.
View current weather.