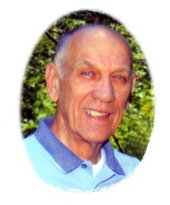 Raymond Mazur, 76, of Weirton, passed away Wednesday, September 19, 2007 at the Weirton Medical Center. Born June 14, 1931 in Kingston, PA, he was the son of Sabina Przekop Mazur of Wilkes Barre, PA and the late John Mazur. Raymond served in the United States Air Force for five years as a Second Lieutenant, where he was a navigator and pilot. After graduating from Penn State University in 1961, he joined Weirton Steel where he worked as an Industrial Engineer and in Information Systems for 32 years. Raymond was a member of St. Paul Roman Catholic Church and Knights of Columbus 3734. As a member of Pleasant Valley Country Club, he won the Senior Club Championship in 1993 and 1995. During his lifetime, he scored an incredible 6 Holes-in-One. In addition to his mother, Raymond is survived by his wife Angela Rocchio Mazur of Weirton, whom he married September 1, 1962; son R. Nathan Mazur and his wife Julie of Weirton; daughters Nicole Sauer and her husband Joseph of Westlake, OH and Salene Rae Mazur Kraemer and her husband David of Pittsburgh, PA; brother Eugene Mazur of Wilkes Barre, PA and 5 grandchildren Melanie, Nicholas, Alexis, Dominic and Michael with Baby Boy Kraemer to be added in late November. The family will receive friends Saturday 6-8 PM and Sunday 1-3 and 6-8 PM at the Greco-Hertnick Funeral Home, 3219 Main Street, Weirton. Funeral Liturgy with Mass will be celebrated 10 AM Monday at St. Paul Roman Catholic Church. Entombment will be in St. Paul Cemetery, where military services will be conducted by the American Legion Honor Guard.Memorial contributions may be made to St. Paul Roman Catholic Church, 140 Walnut Street, Weirton, WV 26062. Please share tributes with his family at www.grecohertnick.com Funeral Home: Greco Hertnick Funeral Home 3219 Main Street Weirton, WV US 26062
View current weather.