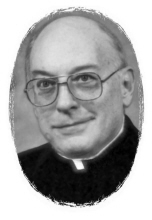 Jesus said, "I solemnly assure you, unless the grain of wheat falls to the earth and dies…." (John 12:24) The Reverend Father Charles John Schneider, retired and living at the Clara Welty Apartments in Wheeling, West Virginia, died on June 10, 2009 at Ohio Valley Medical Center. Born on January 27, 1935 in Charleston, Charles was the son of the late Edward Anthony and Marie Byrne Schneider. He was also preceded in death by a sister Rita Marie Schneider. Father Charlie is survived by his sister Mrs. Mary Schneider McCoy of Dallas, Texas; niece, Judy McCoy Arras (Frank) of Dallas, Texas, and their two children and nephew Gerard L. McCoy (Lisa) and their four children of Tucson, Arizona. Charles was an Eagle Scout and graduated from Charleston Catholic High School. He earned a B. S. in Industrial Engineering from the University of Dayton and worked for Montgomery Ward in Albany, New York, before entering the Seminary. He was an alumnus of Mt. St. Mary's Seminary in Baltimore, Maryland. Fr. Schneider was ordained to the Priesthood on May 25, 1963, by the Most Rev. Joseph H. Hodges, D. D., Bishop of Wheeling (-Charleston). He served as Associate Pastor at St. Anne's in Bristol, Virginia, from 1963-1965. He was Pastor of : St. Thomas Aquinas in Thomas, West Virginia, St. Veronica's in Davis, and Our Lady of Mercy in Parsons from 1965-1971; Sacred Heart in Bluefield from 1971-1981; St. Joseph the Worker in Weirton from 1981-1993; and St. Vincent de Paul in New Martinsville from 1993-2002. Fr. Charles was very supportive of the Teens Encounter Christ movement, establishing Bluefield as a T. E. C. Center for Southern West Virginia. He served on the first Board of Directors for Catholic Community Services in Southern West Virginia. Calling upon his engineering background, he helped introduce the use of gabions (wire baskets filled with stones) to the state. While serving in Weirton, he spearheaded the establishment of Weirton Steel as an E. S. O. P. Within the Diocese, Fr. Schneider served: as a Diocesan Consulter, as Dean of the Bluefield and Weirton Deaneries for a total of 14 years; was a member of the Priests' Senate; served on the Peace and Justice, Unity, and the Art and Architecture Commissions for the Diocese; and was involved in various local hospital boards and local commissions. His body will be received at St. Joseph's Cathedral, 13th and Eoff Streets, Wheeling, on Sunday, June 14th, at 2:00 P.M. Visitation will be held from 2:00P.M. until 6:00 P.M., when Evening Prayer for the Deceased will be celebrated by Very Reverend Anthony Cincinnati, S. T. D., V. E. for Clergy, with the Reverend Father Larry W. Dorsch, Pastor of St. Paul the Apostle Parish in Weirton delivering the homily. Additional visitation will be held Monday from 9:00 A.M. until 10:30 A.M. The Funeral Mass will be celebrated by the Most Reverend Michael J. Bransfield, the Eighth Bishop of Wheeling-Charleston, on Monday, June 15th, at 11:00 A.M. The Reverend Father William A. Anderson, D. Min., Ph. D., will be the homilist. A Funeral Luncheon will be provided for relatives, friends, and clergy in the Great Hall at Central Catholic High School. Following the luncheon, interment will take place at 3:00 P.M. in St. Paul Cemetery, Weirton. In Lieu of flowers donations can be be made to the Valley Hospice 10686 State Route 150 Rayland, OH 43943 or to your local Hospice. Donations may also be made to the Guest House 1601 Joslyn Road Lake Orion MI 48360 Share tributes and memories at www.grecohertnick.com Funeral Home: Greco Hertnick Funeral Home 3219 Main Street Weirton, WV US 26062
View current weather.