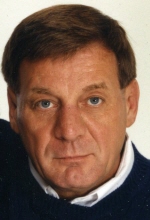 Robert “Bob” Richards, 61, of Weirton died Saturday December 8, 2007 at the Trinity Center East in Steubenville, OH. Bob was born on August 17, 1946, in Steubenville, OH, a son of the late Alfonso and Erma Cooper Richards Haney. He was also preceded in death by his two brothers, Larry and Gary, and his two sisters, Connie Huffman and Carol Mainous. Bob retired after 25 years as a patrolman on the Weirton Police Department. Prior to serving on the force, Bob served three Tours of Duty with the United States Army in Vietnam. He was a member of the Saint Paul Roman Catholic Church, the Holy Name, the American Legion Post 10, and the VFW Post 2716. Bob is survived by his loving wife, Cynthia Finch Richards, whom he married on July 24, 1968; his two sons, Rob Richards of Weirton, WV and Dr. Steve Richards, his wife Misty and their children Christian and Landon Richards all of Vienna, WV. Visitation will be Tuesday from 2-4 & 6-8 PM at the Greco Hertnick Funeral Home 3219 Main Street Weirton, WV. Funeral Liturgy with mass will be celebrated 10 AM Wednesday, at the Saint Paul Roman Catholic Church, Weirton Entombment will follow at the Chapel Hill Memorial Gardens, Weirton, with military services conducted by the American Legion and the Weirton Honor Guard. Share tributes and memories with his family at www.grecohertnick.com
View current weather.