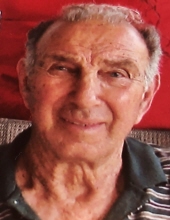 Roy Scarfo, 89, of Weirton, WV, passed away Wednesday, May 2, 2018, at his home with his family by his side. Born January 17, 1929, in Weirton, he was a son the late Nick and Margherita Principato Scarfo. He was also preceded in death by his wife,the love of his life, Florence Gubitti Scarfo in 2017; brothers, Frank and Joe Scarfo; sisters, Mary Coen and Jeanette Mull. Always a farmer at heart, he loved working in his garden, and mowing grass on his son's 1954 Power King, as well as eating his pasta! Roy never met a stranger, and was someone you would like to be friends with. Always a kind and humble man, his passion was his family, and spending time with them. He never complained about a hard day's work, as he worked at various jobs into his late 70's. He worked at Starvaggi Industries for 43 years, and people in our area always say "Ray Scarfo did my cement work!!" A United States Army veteran of the Korean War, Roy was member of the American Legion Post 10, the Teamsters Local 92, and Saint Joseph the Worker Roman Catholic Church, Weirton. Leaving to cherish his memory are his three devoted children, David (Cynthia) Scarfo of Weirton; Daria Norcia of Columbus, OH and Denise Burrows of Atlanta, Georgia; brother Nick Scarfo ; sister, Carmeia Fehl ; 4 grandchildren; Nicole, Candance, Christopher, and Erik; 9 great-grandchildren, Jessica, Kyle, Matthew, Ashley, Cyan, Magdelyn, Sofie, Ally and Missy and 2 great-great grandchildren, Bella and Cole Patrick. Visitation will be Friday from 2-4 and 6-8 PM at the Greco-Hertnick Funeral Home, 3219 Main St., Weirton, where funeral services will be held on Saturday at 9:30 AM. Rev. Father Tony Thurston will officiate. Interment will follow at St. Paul Cemetery, Weirton, with military honors.
View current weather.