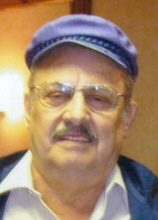 Stelios (Steve) Stefanides, 84, of Weirton, WV died Sunday November 8, 2015, at his home. Born on April 7, 1931 in Xios, Greece, Stelios was a son of the late Alexander and Marcella (Karnoupakis) Stefanides. He was also preceded in death by his wife, Frances (Maganas) Stefanides in 1983, and his son, Manuel Stefanides in 2014. Stelios served in the Greek Navy for three years. He retired from the Mary H. Weir Library, where he worked for forty years. He was a member of the All Saints Greek Orthodox Church, Weirton and the AHEPA Lodge. Stelios is survived by his son, Victor (Loraine) Stefanides of Durham, NC; his two daughters, Anthy (Dr. Panayiotis) Tsitouras of Edmond, OK and, Marcella (Todd L.) Stefanides Frank of Westminster, MD; his two grandchildren, Stelianos and Andreas Frank; a brother and two sisters living in Greece. Visitation will be 2-4 & 6-8 PM Tuesday at the Greco Hertnick Funeral Home 3219 Main Street Weirton, WV. Additional visitation will be 10 AM until time of funeral services at 11 AM Wednesday, at the All Saints Greek Orthodox Church, 3528 West Street, Weirton. Reverend Father Frank A. Milanese will preside. Interment will follow in the New Greek Section of Chapel Hill Memorial Gardens. In lieu of flowers, Memorial contributions may be made to the All Saints Greek Orthodox Church Share tributes and memories at www.grecohertnick.com . 304-748-3219
View current weather.