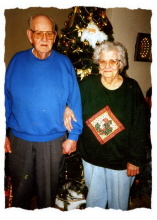 Stewart W. Pitcock, 90, of Weirton, passed away Friday, June 21, 2013 in the Weirton Medical Center. Born April 17, 1923 in New Cumberland, WV, he was the son of the late Herman and Catherine McCormick Pitcock. He was also preceded in death by his wife Nettie Elizabeth Jones Pitcock who died April 8, 2010, brothers Wayne, Sherman, Robert, Gale and Kenneth Pitcock and sisters Ruth Redick and Dorothy Wargacki. With over 36 years of service, Mr. Pitcock retired from Weirton Steel where he worked as a crane operator for the Finish Product Warehouse. He was a lifetime member of the New Cumberland VFW #3526 and the WSX 25-Year Club. Corporal Pitcock served in the Asiatic Pacific Theater where he was a gun crewman, having served as cannoneer of a 105 war howitzer for the United States Army during World War II. He is survived by his son Gary A. Pitcock and his wife Bernice and granddaughter Jaime Halligan her husband Kurt all of Weirton Visitation will be held Sunday from 2-4 and 6-8PM at the Greco-Hertnick Funeral Home, 3219 Main Street, Weirton, WV, where funeral services will be celebrated 11AM Monday. The Reverend William Stout will officiate. Interment will be in Chapel Hill Memorial Gardens where Military Rites will be conducted by the Adam Poe Post #3526 VFW Honor Guard of New Cumberland. Memorial contributions may be made to Weirton Lions Club, 89 Braxton Road, Weirton, WV 26062.
View current weather.