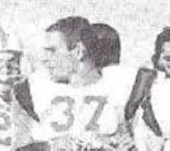 William George MacMillan (71) passed into the hands of his Lord on Wednesday, December 2, 2015 in Burbank, CA. Will was born in Steubenville, OH on 11/25/1944 to William Claude and Nellie McMillan of Weirton, WV. He played both offense and defense on the Weir High Football team that won the 1960 State Championship. In 1981 Will married Laura Bahrs of Santa Cruz, CA and together they raised their four children, Natalie, Jonathan, Brittany and Grace. Will received a BA degree from Washington & Jefferson College, and a Masters of Fine Arts from Boston University. Will, a member of Screen Actors Guild and Actor's Equity, worked and directed on stage, film and TV. He was known as Boris on General Hospital, co-starred on TV in West Wing, Las Vegas, Charlie's Angels, Hunter, Diagnosis: Murder, N.Y.P.D. Blue, Greatest American Hero, Little House on the Prairie and Three's Company among others. In film, he co-starred in George Romero's The Crazies, Clint Eastwood's Dirty Harry 3: The Enforcer, Oliver Stone's Salvador and Robert Zemeckis' Used Cars, to name a few. In 2011, as writer, director and producer, he won the Silver Sierra Award at the Yosemite Film Festival for his short film The Gift. Will was Artistic Director of Psychic Repertory Theatre, which toured the USA for children with special needs from 1976 through 1990. On stage he co-starred in Brigadoon with Charles Durning for Pittsburgh Civic Light Opera, 1776 with Gary Beach for Sacramento Music Circus, Unsinkable Molly Brown with Cathy Rigby for La Mirada Theatre and Pippin for The Theatre League. In 2013 he co-starred in the World Premiere 4-character play Shades, exploring Vietnam Vets and Agent Orange, at The Los Angeles Theatre Center. Will's last artistic venture which the whole family participated in - is the indie film Destiny Trail, completed and screened in Los Angeles in October 2015. Destiny Trail was directed by Will, exec-produced by him and his son, Jonathan, written by his daughter, Natalie, (who also co-starred) and produced by Natalie and his wife, Laura. Will is survived by his wife, Laura and their children, Natalie Hope MacMillan, Jonathan Christopher MacMillan, Brittany Colleen MacMillan, Grace Birkita MacMillan of Los Angeles, CA and by his sister, Deborah McMillan Fisher and her family of Cochranton, PA. A Memorial Service will be held on Saturday, December 19, 2015 at Kirk O'the Valley Presbyterian Church in Reseda, CA. In lieu of flowers, donations may be made to support the submission of Will's Destiny Trail film to festivals. The donations should be made out to Laura MacMillan, P.O. Box 480306, Los Angeles, CA 90048. Share tributes and memories at www.grecohertnick.com
View current weather.