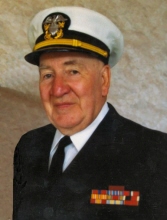 William “Mac” McMillan, 90, of Weirton died Monday, April 13, 2009 in the Weirton Medical Center. His loving daughter was at his side. Born at Pierce, WV, Tucker County, September 23, 1918, he was the son of the late George Baird and Bessie Eva Rice McMillan. Best known as Bill or Mac and later Chief, he moved to Wellsburg, WV at the age of seven. Bill enrolled in Washington Elementary School and then, at the age of sixteen, served in the Civilian Conservation Core in McKee, KY. He graduated from Wellsburg High School in 1937 where he played right guard in football. After graduation Bill worked for Grotz Mold & Machine Co., where he received his First Class Machinist Certificate. In 1938, Bill met the love of his life, Nellie Ralich, and shortly after joining the US Navy in July of 1942, the couple was married on August 19, 1942. While serving on the USS Pasadena in 1945, Bill received word that his son William George was born on November 25, 1944. In 1945 Chief returned home and returned to work for Grotz Mold & Machine. He served in the U.S. Naval Reserves until October of 1978. In 1946, Bill and Nellie’s second child was stillborn, and in 1955, the couple was blessed with their third child, Deborah Carol. On March 20, 1950, Bill started working for the Weirton Steel Company as a machinist in the Strip Steel Electric Department, where he worked for nearly 34 years before his retirement on January 31, 1984. Bill enjoyed traveling with his family, especially camping in the family’s motor home. Mac also was known to participate in the area’s 5 and 10 K fitness events. He was a member of the Cove Presbyterian Church, Weirton Steel 25 Year Club, Reserve Officer’s Club, American Legion Post 10, Moose 688 and a Life Member of the VFW 2716. Bill was preceded in death by his parents, a daughter, two brothers, George and Warren Harding “Dink” McMillan, and his wife Nellie Ralich McMillan on April 16, 2004. He will be sadly missed by his son William George and Laura J. McMillan of North Hills, CA; daughter, Deborah C. and Michael L. Fisher of Cochranton, PA; a brother, Charles Eugene McMillan of Dresher, PA; seven grandchildren, Bethany, Natalie, Andrew, Jonathan, Katelin, Brittany, and Grace. Visitation will be Friday, April 17, 2009 from 2-6 PM at the Greco-Hertnick Funeral Home, 3219 Main Street, Weirton, where funeral services will be conducted 11 AM Saturday. Reverend Ed Rudiger and Chaplain Charles E. McMillan will officiate. Entombment will follow at the Chapel Hill Memorial Gardens, Weirton where Military Services will be conducted by the American Legion Firing Squad. Memorial contributions may be made to the Cove Presbyterian Church or the World War II Memorial. Funeral Home: Greco Hertnick Funeral Home 3219 Main Street Weirton, WV US 26062
View current weather.