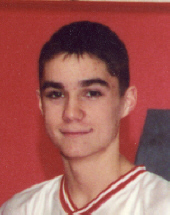 Aaron Michael Davies, 16, was born in Weirton, WV on September 4, 1988 to Chip and Connie (Sullivan) Davies. He was a member of the Weir High Class of 2007, a member of the National Honor Society, Who’s Who Among American High School Students and the Hi-Y Club. He loved sports. He played baseball, football and basketball. Basketball was his passion. On April 26, 2005, at his home, Aaron died after a courageous battle with cancer. He was preceded in death by maternal grandparents, Pete and Theresa Sullivan;his paternal grandmother, Mary Lou Davies; his aunt, Marie (Sullivan) Pociernicki. Aaron is survived by his parents, Chip and Connie; his brother, Adam all of Weirton; his grandfather Clifford Davies, Jr. and step grandmother, Nancy of Steubenville, OH; uncles, Eric and Brent Davies of Weirton and Ed Pociernicki of Aliquippa, PA; cousins Chad Pociernicki of Aliquippa, PA and Ashley Davies of Weirton, WV. Visitation will be 7-9 PM Wednesday and 2-4 & 7-9 PM Thursday at the Greco-Hertnick Funeral Home, 3219 Main Street, Weirton, WV. A vigil service will be held 2 PM Thursday in the funeral home. Funeral Liturgy with Mass will be celebrated 10AM Friday at Saint Joseph the Worker Roman Catholic Church, Weirton WV. Interment will follow at the Saint Paul Cemetery, Weirton. Share tributes and memories at grecohertnick.com
View current weather.