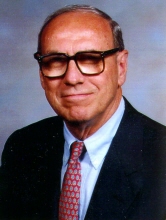 George M. Molnar, 89 of Weirton died Friday, December 12, 2014 at Valley Hospice Care Center surrounded by family. He was born on August 29, 1925 in Charleroi, Pennsylvania. George was a son of the late George M. Molnar and Mercedes Hazel Mott Molnar. In addition to his parents, George was preceded in death by his wife, Margaret A. Mort Molnar who passed way in September 2000. He was also preceded in death by his brother, Daniel F. Molnar. George moved to Weirton in 1933 and attended local schools before entering the U.S. Navy in World War II. After serving three years in the South Pacific and China area, he entered West Virginia University, where he graduated in 1949 with a B.S. Degree in Business Administration with a major in Economics. Mr. Molnar began his banking career in 1949 with the Bank of Weirton, and was named Assistant Cashier in 1957, Cashier in 1961, Vice President in 1965, Executive Vice President in 1968, President in 1969, Chairman of the Board and Chief Executive Officer in 1975, and Chairman of the Board-President, and CEO in 1992. Upon the acquistion of the Bank of Weirton by Wesbanco Wheeling in August 1996, he was elected to the Board of Directors of Wesbanco, Inc. and to the Board of Directors of Wesbanco Bank Wheeling. He was named President of the Wesbanco Weirton and Chairman of the Wesbanco Weirton Board of Advisors. He was a member of the Board of Advisors of the J. C. Williams Charitable Trust (PNC), the Board of Trustees at Weirton Medical Center, the Board of Directors of the Weirton Medical Center Corporation, AAA East Central/West Virginia-Weirton Region, and Weirton United Way. He was a past President of of the Steubenville Chapter of the American Institute of Banking and holds certificates from the American Institute of Banking and the West Virginia School of Banking. He held memberships in the Williams Country Club, and Pleasant Valley Country Club, where served as President for 14 years. He was also a member of the Duquesne Club in Pittsburgh Pennsylvania, and the Veteran of Foreign Wars. George is survived by his two daughters, Jane (Paul) Lagrotteria of Plum Boro, Pennsylvania and Margaret (Dr. Richard) Smith of Presto, Pennsylvania. He is also survived by his long time companion, Joyce Pashke; his sister in law, Carole Molnar and several nieces and nephews. Visitation and funeral services for Mr. Molnar are private. Rev. Fr. Larry Dorsch will preside. Entombment will follow at St. Paul's Cemetery, Weirton. Memorial contributions may be made to St. Paul's Church or St. Paul's Grade School 140 Walnut Street, Weirton, WV 26062.
View current weather.